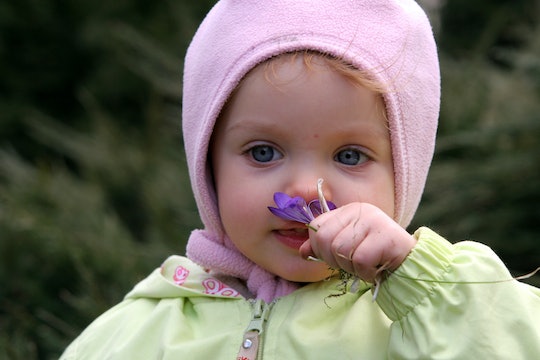 At 2 years old, my daughter makes a habit of stopping to notice the small things, like a particularly interesting crack in the sidewalk or a plane flying overhead. She will even, quite literally, stop to smell the roses, taking in a big whiff of whatever blooms are close by. With such a keen sense of everything that is happening around her, I often wonder how she takes absolutely zero notice of just how badly, for instance, her diapers can stink. I mean, do toddlers know that their diaper smells?

"A baby's sense of smell starts in the newborn period itself and gradually increases during the first six months of life," Dr. Sumanth Amperayani, a pediatric expert at JustAnswer, tells Romper in an email interview. "It usually peaks by 6 months."

According to What To Expect, your toddler has been using their sniffer long before you might have realized. "A newborn finds his mom’s nipple by its scent and can distinguish the smell of her milk from a stranger’s," the website noted. One study even discovered that infants can pinpoint the smell of their mama's amniotic fluid. Say whaaat?

But as good as their sense of smell is, Amperayani explains, young children lack characterization of these smells. "What this means is that toddlers realize smell, but may not be able to effectively differentiate between pleasant and unpleasant smell," he says.

"[But] as smell registers everything and as maturation takes place, it starts categorizing smells as good and bad," Amperayani says, adding that there is no accurate way of predicting when a toddler starts categorizing smells and it varies based on exposure to stimuli. "The challenge is that as the learning process of characterizing smells goes on, the toddler may not realize to avoid or keep away smelly things or offensive foods." For example, a toddler may not know to avoid a spoiled or smelly cheese or be able to readily identify odors attached to poisonous substances, Amperayani says.

On the other hand, if your toddler takes issue with their diaper, then it's most likely because they "dislike the feeling more than the smell," says Leigh Anne O’Connor, International Board Certified Lactation Consultant (IBCLC) and parenting coach, in an email interview with Romper.

There are, however, a few ways to help your little one begin to better identify different smells, according to Fatherly. Not only will it help with context, but experts say it can also be useful in developing vocabulary. "Being able to describe smell requires imagination," the article noted.

One way to do this is to invite your child to help you in the kitchen, asking them to identify spices or herbs while you are cooking. Describe the taste of various foods to your child and ask them to repeat words back to you in order to help expand their vocabulary.

Of course, with the introduction of new foods and smells will also come another common toddler behavior: resistance. Keep in mind that during this time, your kid might turn their nose up to especially pungent foods or show interest in something that seems odd to you, according to Families.com. "It's important to recognize that taste and smell are very closely intertwined and that what smells funny to them is something they are going to resist tasting — so be patient and take your time," the website noted.

Which is kind of like anything with kids, right? Patience and time goes into so many of your parenting decisions, and helping your child with smell is no different. And when they do start to recognize more smells, you'll find yourself wishing for help with another toddler-ism — telling everyone exactly what they think.