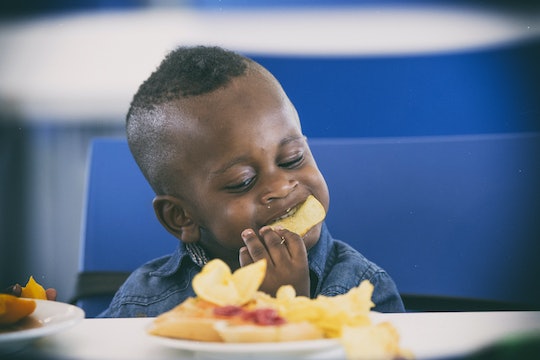 When I was growing up, cleaning your plate wasn't an option. I was given food, and it was expected that I'd eat what I was given. It didn't matter if it was leg of lamb and cheesy dumplings or biscuits and gravy with fried apples, if it was in front of me, I ate it until it was gone. It wasn't until I had my own children that I began to question this practice. I remember eating well past being full, but I don't remember how old I was at that point. For instance, do toddlers know when they're full? Infants? When does the understanding of satiety settle into one's consciousness?

As it turns out, there are many influences present on a toddler's ability to understand their own levels of fullness. Recent studies suggest that it begins in infancy with the weaning process. According to Pediatric Obesity, babies who are allowed to take the lead over their own weaning by self-feeding and choosing their foods are more likely to approach toddlerhood with a better comprehension of their own hunger cues, and they are better able to determine when they are full. However, Nemours Health Systems noted that all toddlers will exhibit cues to their own fullness, even unconsciously, as an effort to prevent uncomfortable overeating.

It's not just how children wean off breast milk or formula, either. How parents talk to their children about food, and the habits they enforce, also have a great deal of influence over their toddler's ability to recognize their own satiety and not overeat, according to the International Journal of Behavioral Nutrition and Physical Activity. There are more possible landmines surrounding children and their relationship with food than just encouraging membership in the "clean your plate club." As per the study, food restriction, negative language involving food and dining habits, and obsessive monitoring of intake are all what the study describes as "obesogenic triggers." Those are external triggers that trip off an internal mechanism that fundamentally shifts how children relate to food and their own success in distinguishing hunger and satiety from other emotions and feelings. The study noted:

"Although parents may attempt to restrict their children’s eating to reduce weight and maintain health, theorists suggest restriction may lead to the opposite effect by encouraging children to seek out restricted foods and failing to help children regulate eating based on satiety."

Simply put, this study suggests that children can be very good regulators of their own need for food and they can grasp fullness, but that doesn't mean you shouldn't encourage healthy behaviors or eating. The way in which you model such is key here.

I never learned this. My grandmother was a very thin woman, almost to the point of fragility, and I think she resented that. To that end, I was a slight child, tall and lanky, but very slim. She constantly told me I needed to eat, but also told me that no one would ever want a fat girl. The other side of my family lived through the depression and came out road weary. Food was precious. My mother was raised in this belief, and spent a great deal of time rounding up duck eggs and farming with her grandparents. My MawMaw did not accept the idea of full. If she put food on your plate, you ate it, and that was that. I suppose it would've been far easier to turn away from had she not been such a wonderful southern cook. If it could be made in Crisco or lard, well, it just would be.

This led to a very rickety and strained relationship with food that I struggle with to this day. I've been very obese and very thin and now I'm somewhere in-between, and still not happy with how I eat or my relationship with food. I don't want that for my children. I asked a pediatric research nutritionist, Dr. Tabitha Foner, RD, PhD of Brooklyn, New York, if toddlers know when they're full, and when and how that happens. She tells Romper, "They surely do. Kids have much better governors on their stomachs than we do as adults. It starts when they're babies — they spit up what they can't hold in their stomachs, or they refuse to eat any more."

She says that toddlers will give you cues that they're done even before they can speak. They'll shake their head or they'll push away the food. They might also bite on the spoon or their hand and ignore you. "Don't push the food. If they haven't taken a single bite, you can definitely encourage them, but don't force it," Foner explains. She adds that the best way to get your kids to eat regularly and to eat well is to model the behavior yourself. You should be eating healthy foods and snacks and having a good relationship with food. "Let your children be the guide, but there is benefit to enforcing meal times and snack times. Grazing shouldn't be encouraged because it's easy to fall into a pattern where you're always snacking and never getting the nutrition you need."

When it comes to my children, I'm actually buoyed by my kids' relationship with food. While my daughter will hardly ever turn down something sweet, she and my son are both good regulators of their intake, and it makes things like growth spurts very recognizable. Foner notes that it's up to us to show our kids the wonder of vegetables and what hungry truly means, but also, it's up to us to watch for the cues they're giving us that show they're full. It won't do much for the plate they just flipped on the floor though.