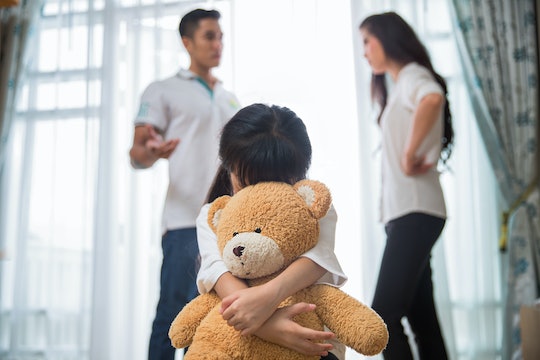 Do Toddlers Know When You’re Fighting? Your Little One Is More Affected Than You Think

A friend of mine recently retold a startling conversation she had with her 2-year-old son before bed. “We were saying our nightly ‘I love yous,’,” she recalls. “And he said, ‘I love Mommy, and Mommy loves me; and I love Daddy, and Daddy loves me; but Mommy no love Daddy. Daddy say Mommy stupid.’” That’s when she realized their hushed arguments and unspoken tension weren’t going unnoticed by her little boy. And her heart broke, right then and there.Clearly kids are intuitive, perceptive little beings, but do toddlers know when you’re fighting? How much do they understand before their language is established and their lifelong memories are formed? How much damage do our heated arguments have on the children? As evidenced by my friend’s wake-up call, they’re paying attention more than we realize. But do they really know what’s going on? I spoke with Los Angeles-based therapist and psychologist Sherrie Campbell who told me the truth.

“Toddlers are probably even more aware when their parents are fighting than older children because toddlers haven’t built up any defenses to conflict yet,” she says. “They can feel the emotional energy between their parents and are extremely sensitive to it. They know through observing and taking on the feeling of their environment. Emotions are contagious and toddlers are no exception — if anything, they’re more vulnerable.”

Samantha Rodman, a licensed psychologist and author of How to Talk to Your Kids About Your Divorce echoes Campbell’s sentiments. “Many parents believe that since the content of their discussions are too complex for their young kids to understand, it’s okay to have these arguments in front of toddlers,” she says. “However even babies can pick up on tension, angry or upset tones, and body language, causing them to feel abandoned, frustrated, scared, and sad.”

Considering babies and toddlers have little references to tell them they’re safe, they’re constantly taking the emotional temperature of the room, especially from their parents, to know that things are all good. And how their parents treat each other is a major indicator of whether or not they feel safe. In fact researchers at the University of Washington found that toddlers as young as 15 months can understand people through visual and social cues, and they use that emotional information to guide their own behavior.

So how do you know if your kids are absorbing household tension? Both Rodman and Campbell say toddlers will often cry out words like “stop,” “scary,” and “don’t talk.” They might push their parents apart, or even act out to get their parents to stop fighting and focus on the child, who needs love and reassurance. Or, in the case of my friend, they might announce their observations at the most unexpected times.

“It’s monkey see, monkey do with children of all ages,” Campbell says. “If parents fight, toddlers will learn to mimic this behavior. So when you see or hear a toddler yelling, fighting, or saying ‘shut up’ or other things their parents say, these are clear signs that fighting is going on in the home.”

Of course not all fights are equal. According to Heather Turgeon, psychotherapist and family therapist, it’s the type of conflict that makes all the difference for little kids. “Constructive arguments bode well for a child’s psychological health — kids exposed to parents debating, talking through their feelings (even when they include anger), and working toward a solution are found to be more empathetic, tuned into their peers, and socially skilled,” Turgeon wrote for Babble.com. “Kids exposed to nasty conflicts, including insults, swearing, and physical aggression, on the other hand, are more likely to either act out or withdraw and show depressive symptoms.” In fact, Turgeon argues that it’s better to work out your difficult feelings in front of your children than avoiding conflict altogether. “Little kids pick up on emotional distance just as well as they pick up on anger,” she wrote.

But if parents can’t control their knock-out, drag-down fights with some calm resolution, Rodman suggests hashing out issues when the kids are sleeping or out of the house. If that’s totally impossible, find counseling where you can scream and argue in a safe space — without little eyes and ears absorbing the emotional dysfunction. Because even if they’re too young to say “Mommy no love Daddy,” they might be feeling it all the same.