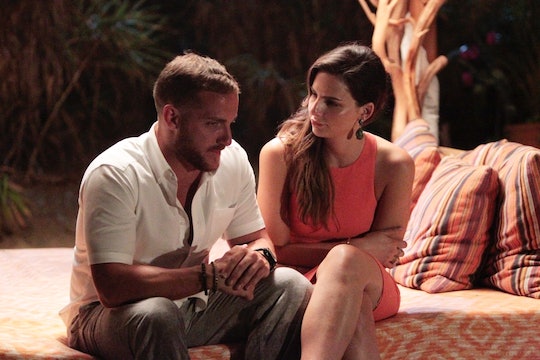 Do Vinny & Izzy Still Speak After 'Bachelor in Paradise'? They're On Pretty Good Terms

If there was any one couple I would've banked on to make it until the end of Bachelor in Paradise Season 3, it was Vinny and Izzy. The lovebirds didn't get much screentime at all on their respective Bachelorette and Bachelor seasons, but they really shone together in Paradise, bonding on night one. Unfortunately, it wasn't to last – Izzy unexpectedly dumped Vinny during Week 4, breaking the hearts of Vizzy fans all across the nation. But do Vinny and Izzy still speak outside of Bachelor in Paradise?

Given how their relationship ended, I wouldn't have expected Vinny and Izzy to ever acknowledge one another again. Izzy dumped Vinny in the worst possible way, on national television – she told him that she was attracted to another guy (lamp dude Brett, inexplicably), preferring to pursue her connection with him instead of Vinny. It was really rough and admittedly Izzy handled it very poorly, though to be fair, there isn't really a good way to dump your boyfriend of one month for a guy who showed up on a beach in Mexico carrying a lamp.

Of course, karma is a cruel mistress, so just barely two weeks later Izzy got a taste of what she'd done to Vinny when Brett dumped Izzy to pursue Lauren Himle for approximately five minutes before leaving Paradise himself. Izzy left Paradise post-breakup to "win back" Vinny, only to have him tell her in no uncertain terms that, essentially, she showed her true colors in deciding to dump him and there was no coming back from that, for him. He might as well have just played Taylor Swift's "We Are Never Ever Getting Back Together" into the phone. It was an admirable moment for Vinny and a heartbreaking one for Izzy.

Despite claiming to have no desire to get back together with his ex, Vinny is still a stand-up guy and clearly cares for Izzy on some level. He was quick to defend her on Twitter when viewers began to lash out at her for having hurt Vinny, which was really sweet and gentlemanly of him.

Izzy, for her part, only had good things to say about Vinny via Twitter, even after dumping him for Brett – which, clearly, is because she realized in retrospect she'd make a mistake in choosing Brett over Vinny.

She even poked fun at herself for her failed call to Vinny attempting to get him back.

Adding to reunion speculation was a photo released by TMZ, showing the two former lovebirds "getting cozy" on a flight. Izzy appeared to be napping on Vinny's lap, which is decidedly more-than-friends behavior – especially between very recent exes. The two claimed that they are just friends, and Izzy expanded on their "close relationship" and the circumstances of their plane-snuggling during an interview with HollywoodLife:

I was sleeping on his lap on the plane. He had a gig in AC, so he flew to NYC and I live here, it was just convenient. It wasn’t a surprise. It wasn’t a shock. We had planned to travel back together. We definitely created an unbelievable friendship there in this situation that not many people get to experience. We definitely have a close relationship. So we’re friends.

That's sweet, but I'm not *fully* buying the "just friends" explanation. Izzy and Vinny seemed to have one of the most genuine connections in Paradise – at the absolute least, they've developed a friendship, which is the best foundation for romance. Here's hoping that these two can make it work in the real world, post-Paradise.