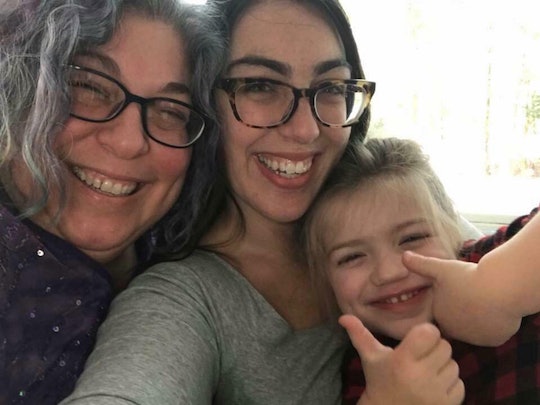 It is a truth universally acknowledged that, at some point in a person's life, they will say something/do something/look in a mirror and realize, in resignation and shock, that the've become their parent or parents. As someone who has always been her mother and is rapidly also turning into her father (how is this possible?!), I'm pretty convinced we all end up like our parents, but I wanted to be sure and figured I'd ask other moms and dads to reveal the traits they share with their parents. Spoiler alert: I am not alone.

I mean, let's be honest: are we all that shocked? These are, after all, the people who raised us, to say nothing of the genetic factor that is often (but not always) at play. And the eerie similarities can run more deeply than inheriting mom's frown lines or dad's compulsion to make terrible puns. In fact, in a recent survey of 1,000 parents by Care.com suggests that even our financial habits can be traced back to our parents (and that's actually pretty good news overall). Almost half of people who said their parents made poor financial decisions claim they themselves are financially responsible. In other words, it would appear they learned what to do by seeing what not to do. And, unsurprisingly, 62 percent of respondents claim that their financially savvy parents inspired them to also be fiscally responsible.

All this parents/money talk hit close to home for me, specifically the part of my childhood home where my dad would routinely give me lectures about not going into debt and keeping careful tabs on your household budget via Excel spreadsheets. And then also the part of my house now, where I'm in my 30s and realized I've done literally everything the old man ever told me to do and couldn't imagine doing it any other way. You guys, I didn't even think I was listening half the time! I thought I was just rolling my eyes and humoring him, but it turns out I am very much my father's daughter and absorbed basically all his financial lessons. And, sure, I joke about it, but you know what? It's great! Especially when we text each other grocery receipts and brag when we come under budget.

But how did other folks seem their parents in themselves? Read on for more proof that we're all doomed to end up like the people who raised us: