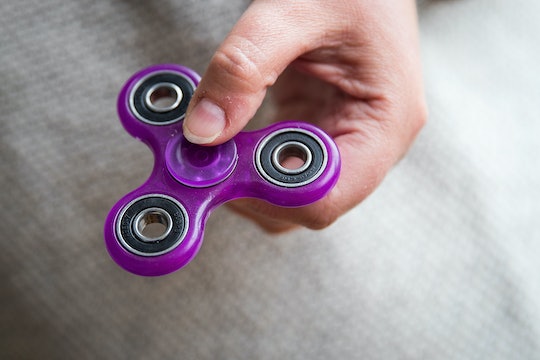 Do We Need More Exercise In Schools?

Fidget spinners are all the rage in classrooms these days — but according to one professor, they could be covering up a more deep-seated problem in schools. Joel Westheimer, a research chair at the University of Ottawa's Faculty of Education, recently told CBC that fidget spinners' popularity could signal a lack of activity in schools, and that parents and educators should look for more ways to build physical activity into kids' everyday life.

It's not that fidget spinners don't have benefits for some children, according to Westheimer. "There's research that shows kids with certain forms of ADHD can benefit from having something to do," he told the CBC on Sunday. "Some of us might tap our foot, and some of us might doodle. It's all on a spectrum of people who need to move around a little."

However, he questioned whether the widespread success of fidget spinners highlights a deeper problem for most kids in schools: a lack of sufficient physical activity in their days. "Maybe we need to look at the curriculum and make it involve more active, physically engaging components to it," he said. He continued:

Several studies have already looked into the benefits of integrating more movement into kids' schooldays. According to a study of 12,000 children in Nebraska, better physical fitness was routinely correlated with higher test scores, regardless of students' body mass. Another study in Illinois found that better fitness was correlated with stronger memory retention in challenging learning situations. According to Edutopia, regular workouts can also increase kids' attention span, memory, and learning abilities while lowering stress levels, and scheduling PE right before math class has been shown to help math-troubled students raise their scores in the subject.

Yet, despite the many positive ways exercise can benefit kids' learning, only about half of American students are actually getting their recommended amount of daily exercise, according to a report released in 2013 by the Institute of Medicine. According to USA Today, experts at the institute recommended a multi-pronged approach to integrating more exercise into kids' days, including daily 30-minute PE classes, physically active classroom breaks, and options for activity both before and after school in the form of extra-curricular sports.

"This is a whole-of-school approach. It's not just physical education," Harold Kohl, professor of epidemiology and kinesiology at the University of Texas School of Public Health, told USA Today. "It's everything that occurs during school as well as around the school day."

Whether fidget spinners are masking a larger problem or not, it's never a bad idea to get kids moving. If you're concerned by how much your child is sitting during the day, talk to educators about building more physical activity into school hours, or consider pitching a fun extra-curricular activity to your child. Who knows? They might not need that fidget spinner after all.