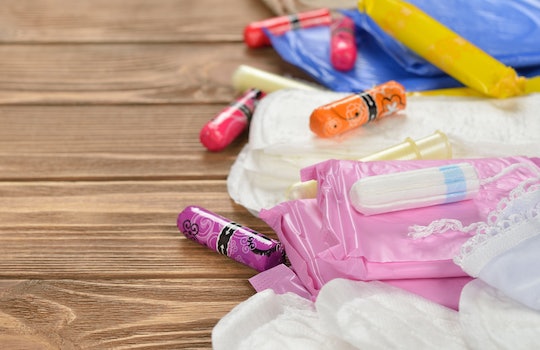 OK, So Here's What's Really Happening When Your Period "Syncs" With A Friend's

I've always heard that if you spend enough time with someone, your cycles will naturally sync up. In fact, I think just about every teenage girl recites this as fact at least one time growing up. I even heard a story about a sorority house stocking up tampons during one week every month, because supposedly every sister was on her period at the same time. So, is there actually any truth behind this story? Do women's menstrual cycles sync up?

If it's not a real thing, how did this myth come to be? According to Scientific American, Martha McClintock was the first person to write about this idea of period synchrony after noticing this "phenomenon" in her all-girls college dorm. She surveyed 135 women and determined that, over the course of a school year, friend groups had periods gradually closer together. She claimed that pheromones, those invisible and undetectable little chemicals we all give off, can communicate with other bodies and affect what's going on inside — periods, in this case. Thus, the "McClintock effect" was born.

However, according to the Mayo Clinic, a menstrual cycle can be anywhere from 21 to 35 days. So... how can you sync up with someone with a different length cycle? Well, you can't — your uterus is on a different schedule than theirs, and it will likely stay that way. However, once every few months, it is inevitable that you will be on your period at the same time. And that, my friends, is what we call confirmation bias: seeing that one synchronized period as proof that this phenomenon exists, rather than seeing the five other asynchronous periods as proof that it doesn't.

Of course, it's always best to back up everything with science. According to an article by The Guardian, the menstruation and fertility app Clue teamed up with Oxford University to study 360 pairs of women. They analyzed three cycles for each pair, and realized that, by the end, their periods were actually farther apart than they were to begin with. Marija Vlajic, a data scientist for Clue, told The Guardian, “This doesn’t mean that pairs go out of sync — it means they were never in sync in the first place. It’s the nature of two mathematical series that keep repeating: the series will diverge as the numbers grow.”

It makes sense that this myth has been perpetuated so long, and Vlajic summed it up eloquently. “I can see how it gives you a special connection with a woman to go through that at the same time. It feeds into a feeling of connection, support, and sisterhood. Even though we do it every month, periods are personal and the thought of sharing with someone makes the idea powerful. That’s why we continue to look for patterns even when they don’t exist,” she told The Guardian.

So, no matter how much time you spend with someone or just how close your friendship is, your uteruses (uteri?) are going to do their own things. The next time you happen to sync up and you and your bestie get to PMS, commiserate about cramps, and pig out on ice cream together, just enjoy it. While it doesn't mean your bodies are on the same magical wavelength, it does mean you don't have to go it alone for one glorious cycle.