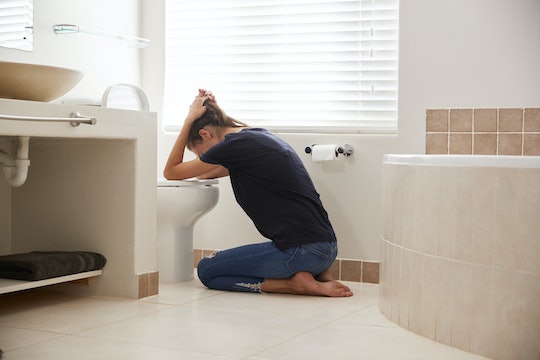 My pregnancies were vastly different from one another. While each pregnancy brought the special sort of Hell that is hyperemesis gravidarum, with my daughter, there were fleeting periods of time wherein I actually felt OK. Imagine my surprise when I learned that common knowledge states girl pregnancies mean more nausea and vomiting, when I knew the opposite to be true. It's definitely one of those cases of individual pregnancies each being different, but if more women get sick with girls, do you get morning sickness with a boy? Perhaps in a more limited capacity?

A study in Economics and Human Biology found that there is a strong link between girl births and hyperemesis, confirming the long held belief that women who are pregnant with girls are more likely to experience the worst morning sickness has to offer. That doesn't, however, negate the real, lived experiences of mothers of boys who go through the ringer of nausea and vomiting with pregnancy, it just means they're statistically less likely to experience it.

However, headaches and increased blood pressure are associated with giving birth to a boy, found a study in the American Journal of Hypertension. While the threshold for determined correlation was significantly lower than in the study of hyperemesis, it was still statistically significant, with some mothers experiencing the trifecta of nausea, vomiting, elevated blood pressure, and pressure-related headaches.

If that's the case, do you get morning sickness with a boy, or is it something else entirely? According to the BBC, you absolutely can, but it might or might not be as bad as it would be if you were pregnant with a girl. Also, you're more likely to experience additional effects other than just the nausea and vomiting of pregnancy or hyperemesis. As to why, the report noted, "There could be all sorts of explanations, morning sickness is something to do with hormones — girl babies may produce different hormones, that could be part of the problem."

If you examine the old wives' tales about morning sickness, you're going to come up on a lot of conflicting information. While my MawMaw swore to the fact that boy pregnancies were 10 times worse than girl pregnancies, (and she should know, as she had several of each), my mother-in-law contested to me that being pregnant with a girl basically meant nine months of misery and puking.

She's not alone. The majority of my friends with whom I spoke each had their own ideas, and while most of them were on team "being pregnant with a girl is its own fresh hell," a few were in my camp of "migraines and praying for unconsciousness."

As per the BBC report, "There are a number of illnesses in pregnancy that are triggered by the baby and there are differences between boys and girls." This is just an example of one of them — and perhaps is the case spoken of most frequently because it's just so prevalent. According to the journal Gastroenterologists and Clinicians of North America, a full 70 to 80 percent of women experience morning sickness in some form during their pregnancy. Hyperemesis Gravidarum, the severe form of morning sickness, is far more rare, only occurring in two percent of pregnancies. However, women who've been diagnosed are more likely to experience it in subsequent pregnancies.

It sucks, but the truth is, some women just have crappy luck when it comes to morning sickness. While my HG wasn't as bad during my second pregnancy as it was my first, I'm apparently an outlier. Hopefully, you'll fall in the category of those less likely to get sick, no matter what the sex of your baby is.