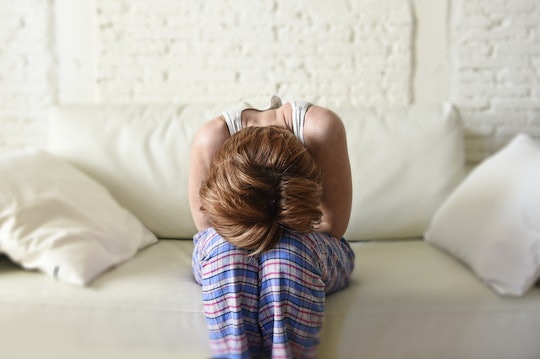 What Every Pregnant Woman Needs To Know About Her Period

Whether or not it's the lack of comprehensive sex education that has been plaguing the United States in recent decades, or a continued sense of socially-contrived shame surrounding reproduction and women's bodies, one can't be sure. Either way, it's somewhat normal to have a question about pregnancy you're not entirely comfortable asking other people. So if you're wondering, "Do you get your period when you're pregnant?" don't feel like it's a question you shouldn't ask. Knowledge is power, my friends, and knowing the answer to this particular inquiry could definitely come in handy when either you, or someone you love, is growing another human being inside their body.

First, let's get some background information on what a period actually is. Planned Parenthood explains that a period generally happens once a month to people with working ovaries, uteruses, fallopian tubes, and vaginas. Each month hormones help an egg release from an ovary. The egg travels through the fallopian tube and into the uterus, which is called ovulation. If the egg does not meet with a sperm cell in the uterus, the hormonally thickened uterine lining will shed. The blood and tissue from that shedding is released through the vagina, which is called a period. Planned Parenthood went on to say, "If you do get pregnant, your body needs the lining — that’s why your period stops during pregnancy. Your period comes back when you’re not pregnant anymore."

So that's it then? No period while pregnant, right?

While it's technically true that a person cannot menstruate while pregnant, there are other reasons a person might bleed during pregnancy. Sometimes this bleeding, regular or irregular, may cause people to get what they think are regular menstrual periods.

BabyCenter says some people have light spotting before their missed menstrual period that can be referred to as "implantation bleeding." Though the consensus points to experts not really knowing why this bleeding happens, they think it's the fertilized egg implanting into the uterine wall.

Because of an overall increase in blood production in a pregnant body, BabyCenter says you may also experience bleeding after vaginal sex or a vaginal exam. Of course, bleeding in pregnancy can be a sign of a serious complication with your pregnancy, so BabyCenter advises pregnant people to always consult their health care provider right away if they notice unexplained bleeding or pain.

But what about regular, period-type bleeding throughout pregnancy? Well, dear reader, there isn't really a good answer for that. Message boards, midwife centers, and birthing classes seem to always have that "one person" whose sister "had her period the whole nine months and never knew she was pregnant until labor!"

The experts at the American College of Obstetricians and Gynecologists (ACOG) don't address this so-called phenomenon directly. However, they do say that though not all bleeding in pregnancy is problematic, it behooves the pregnant person to contact their OB-GYN at any sign of bleeding, just to make sure. An exam should help you clear up the reason for the bleeding.