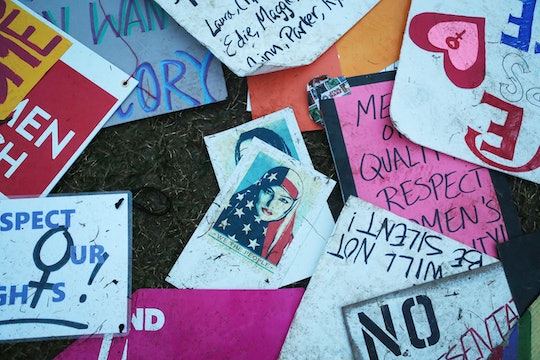 Do You Have To Register For The Women's Strike?

On Wednesday, the organizers of the Women's March have called on women worldwide to participate in a general strike called "A Day Without Women," modeled after February's "A Day Without Immigrants" social protest. The general strike premise is simple: Take a day off of work. Of course, it's more nuanced than just taking the day off, so do you have to register for the Women's Strike?

While you don't need to register for the Women's Strike in the traditional sense of the word, it's probably a good idea to let your boss know if you plan on participating. And unlike the Women's March on Washington and its 200-plus sister marches in January, the Women's Strike is a far more amorphous protest action that doesn't require specific head counts for march zoning and planning purposes.

Of course, it's up to you whether to tell your boss if you're participating in the Women's Strike: As far as they know, you could have requested a day off for any number of personal reasons. Women's March organizers have added a Women's Strike Pledge signup form to their website. This will basically add you to a running tally of people who are participating in Wednesday's Women's Strike — but isn't any kind of "official" registration by any means.

While the Women's March was intentionally created to send out a message of unity and human rights as a response to Trump's inauguration, the goals of the Women's Strike are a bit more open-ended. Set to take place on International Women's Day, the Women's Strike is a protest action meant to call attention to the contributions of women, and how they're so vital.

The Women's Strike organizers have proposed three specific actions for strikers on Wednesday, the most important being that protestors should take the day off from work — but only if you can. The protest isn't worth losing a job and, for some working women, that's a distinct possibility: As many as 100 workers lost their jobs on "A Day Without Immigrants" last month, according to The Atlantic.

But unlike other historical general strikes by women, the roles that women inhabit in the 21st Century are far broader than they used to be even as recent as a decade ago. Given that not all women will have the luxury or privilege of being able to take a day off from work, some have argued that the Women's Strike is mostly for privileged women rather than the women affected by economic inequality that the strike is meant to support.

Feminist ideological debate and your own personal work participation aside, you can visually register your support by wearing red for the Women's Strike on Wednesday.

So whip out the matte red lipstick or your favorite scarf, and stand in solidarity with your fellow women for the Women's Strike on March 8.