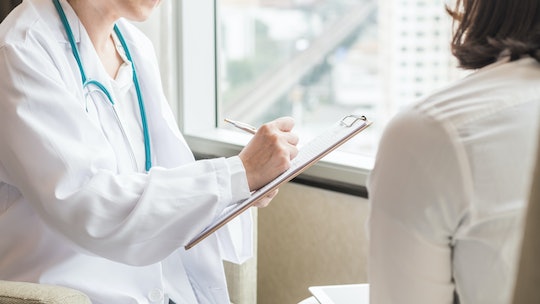 Do You Need A Measles Booster? Here's What You Need To Know

The United States in the midst of an epidemic — measles cases are on the rise and many in affected communities are in a state of panic. While the disease was thought to be eradicated in 2000, the current outbreaks are at the highest they've been in the past two decades. Do you need a measles booster? Here's what you need to know.

More Like This
Survey: Just 30% Of Parents Would Get Their Kids Vaccinated Against COVID-19 Right Away
Vaccine Shedding Is Not A Thing, Experts Say
How Close Are We To A COVID-19 Vaccine For Children?
Ohioans Could Win $1 Million Or A College Scholarship If They Get Vaccinated

Measles is a highly-contagious, airborne disease that can be spread through infected fluids that are released by the coughing, sneezing, and talking of an infected person, according to the National Vaccine Information Center. The virus can live on surfaces and in the air for more than two hours after the infected person has left the area.

It's so contagious in fact, that you have a 90 percent chance of contracting the disease if you're unvaccinated and come in contact with it, according to Dayton Children's Hospital.

According to the Mayo Clinic, symptoms of measles occur about 10 to 14 days after you were exposed to it and include things like fever, a dry cough, a runny nose, a sore throat, pink eyes, and skin rash.

The Centers for Disease Control and Prevention recommends that children receive two doses of the Measles, Mumps, Rubella (MMR) vaccination, with the first at 12 to 15 months and the second at 4 to 6 years of age. Getting all three vaccines at once means less shots for a child, and a decreased delay in protection from the three diseases.

"Right now, no one fully immunized needs to get a measles booster. We are offering an early MMR vaccine to infants living in high risk areas with current measles outbreaks," Dr. Dyan Hes, Medical Director of Gramercy Pediatrics, said in a statement to Romper. "This is for infants ages 6 to 11 months who have not yet been vaccinated for the measles because they are not 1 year of age. The is not in place of the one and four year vaccine, but in addition to the regular vaccine schedule."

That means that if you or your kids got both doses of the MMR vaccine, you shouldn't need any sort of booster. If you (or they) only received one dose, however, you might want to check with your doctor about a second dose.

One dose of the measles vaccine is 93 percent effective and with the second dose that number increases to 97 percent, according to the CDC.

"The outbreaks we are seeing now in the United States are the result of importations," Jason McDonald, media representative for the CDC’s National Center for Immunizations and Respiratory Diseases, told Romper in a statement. "That is when an unvaccinated person travels to the United States from a country where there is ongoing measles transmission, acquires the virus and arrives here to infect other unvaccinated persons."

If adults never received the measles vaccine as a child, the CDC advises that they get at least one dose, USA Today reported. But, high-risk patients like international travelers and college students should get two, the outlet added.

If you are unsure if you are vaccinated, try and find your vaccination records. If you can't find them, you can always get vaccinated again, or have your blood tested to see if you have an immunity, according to The Immunization Action Coalition.

A very small percentage of vaccinated people, roughly 3 percent, will still contract measles if exposed to the disease, according to the LiveScience. So, an outbreak is dangerous for everyone, especially infants who are too young to get their first dose of the vaccine.

This year, the United States has seen the second largest measles outbreak in the past two decades, with 387 cases reported in 15 states, according to USA Today.

New York is also dealing with a measles epidemic so grand that a county executive has declared a state of emergency, barring any unvaccinated teen or child from public spaces, and the mayor of New York City has declared a public health emergency, according to The New York Times.

For every 1,000 kids who contract measles one or two will die and in countries where the vaccine is not available, the disease remains a leading cause of death, according to The New York Times.

One might call this a full-blown measles emergency. While some states have laws exempting people from getting vaccines due to moral or religious reasons, many are moving to change them to control future and current outbreaks, according to the New York Times.

For some parents, the fear of potentially harmful toxins or belief in vaccine-induced autism are reasons to either delay or forgo vaccines altogether, according to the World Health Organization. The latter of these fears has been debunked by numerous studies and WHO noted that both are misconceptions.

So, in reality, there is no reason not to be vaccinated.

The best protection is immunization. Bottom line — measles is a dangerous disease that can spread like wildfire if not contained. As always, arming yourself with the most up to date information is key.