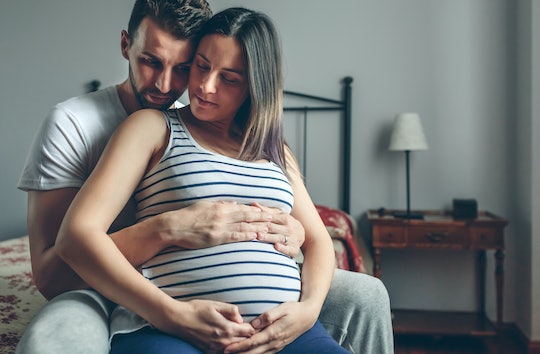 Here's The Deal With Condoms & Pregnancy Sex, According To Experts

If you are like me, you've spent most of your adult life trying to prevent pregnancy. Once you're pregnant, though, it might seem like you're off the hook for birth control and you don't have to worry about any, you know, "surprises." So do you use condoms when you're pregnant? According to the experts, you might not want to ditch condoms entirely. In fact, they might come in handy for a variety of reasons.

It's worth remembering that preventing pregnancy is just one reason people use condoms. This particular form of birth control is also important when you wan to reduce your risk of getting a sexually transmitted infection (STI), which is super important during pregnancy. According to the American Congress of Obstetricians and Gynecologists (ACOG), in addition to sucking for you, having an STI during pregnancy can also be dangerous for your baby. Gonorrhea and chlamydia can cause eye infections and pneumonia in your unborn baby. Syphilis can lead to miscarriage or stillbirth, and HIV and Hepatitis B can be transmitted to your baby during birth, all according to the ACOG. For the aforementioned reasons and potential complications alone, the Center for Disease Control and Prevention (CD) recommends that all pregnant women be routinely screened for STIs and HIV during their pregnancies.

According to the Cleveland Clinic, if you are pregnant, both you and your partners should be screened for STIs. If you and/or your partner are not monogamous, you are at risk for STIs and should definitely use a condom every time you have sex, in order to reduce your chances of contracting an infection. The Cleveland Clinic adds that if you have unprotected sex with a new partner during pregnancy, you should definitely get tested again so you can know your status and get any necessary treatment as soon as possible.

According to Babycenter, oral sex is safe during pregnancy, but only if your partner doesn't experience a herpes outbreak or thinks they might have one soon. If your partner is HIV positive or you are unsure of their status, you should have them use a dental dam (a sheet of latex) for oral sex.

According to BabyCenter, when it comes to which condoms to use, latex condoms are your best choice. If you like lube (and who doesn't?), remember that oil-based lube and latex condoms don't mix. For people who are sensitive to latex, BabyCenter recommends polyurethane condoms. They have the advantage of being thinner and able to be used with multiple types of lube, but may tend to break more often than latex condoms.

If you are in a monogamous relationship and you both have been tested, you are probably OK skipping condoms during pregnancy sex, if that's your preference. If you, however, have sex with multiple partners or a new partner while pregnant, it's a good idea to use condoms to protect yourself and your baby from STIs.