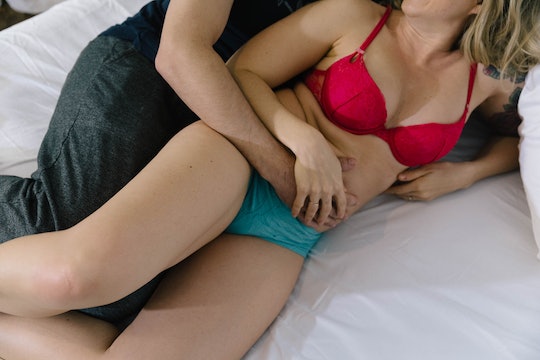 Here's How Your Breastfeeding Boobs Might Feel During Sex, According To Science

Breastfeeding is a wild ride. I felt a bit like the embodiment of Mother Nature every time I fed my child. It was a strangely heady sensation that I suspect lived somewhere in my hindbrain as encouragement to continue when I wanted to give it up — like when I realized it could interfere with my sex life even more than lack of sleep had already done. Achy, sore breasts didn't make me feel sexy, and it was uncomfortable. It might be similar for you. There might even be pain. Do your boobs hurt during sex if you breastfeed? It's possible they can, and breastfeeding could potentially impact your sex life more than you thought.

A lot happens to your breasts during the postpartum period, and having sex can exacerbate these symptoms, sometimes to the point of discomfort or even pain, according to the Journal of Sexual Medicine. The breasts are far more sensitive during the breastfeeding period than during the normal course of a woman's life, and while some women may find this a boon to their sexual habits, others can find it difficult to navigate. According to The European Journal of Obstetrics and Gynecology and Reproductive Biology, "While some studies report a positive effect on sexuality, the evidence for the negative effects outweighs the former." This might be due to the discomfort associated with sex while a woman is also breastfeeding.

The hormone oxytocin, responsible for the bonding and happy feelings during sex, is also, unfortunately, the same hormone that triggers the milk ejection reflex in lactating mothers, according to the Journal of Perinatal Education. Therefore, while you might have started to get busy with your partner, it doesn't take much sexy time action to see your breasts fill and begin to ache and get sore, begging to be emptied. They might also begin to leak, or, dare I say it, spray all over your partner like a set of automatic sprinklers.

Which, as any breastfeeding mother will tell you, feels much better than the aching and soreness, but it's messy, and you might be embarrassed. You might be concerned with how your partner will react to your recently unleashed milk cannons. In my experience, it's messy, but your partner is too busy getting busy to give a crap. Sexual intercourse is already 90 percent bodily fluid related — this just bumps that up a bit.

Do your boobs hurt during sex if you breastfeed if you are careful not to overstimulate your nipples? They can. They're vastly different than they were before you were pregnant. They're heavier, they're more sensitive, and generally, they take a pretty regular beating at the hand and jaw of a baby. With the increased blood flow to your breasts that happens during sex, those symptoms are increased multifold.

Let's not forget that your nipples might be sore as heck from the normal act of breastfeeding daily. It's also possible you have a plugged duct that makes itself known during intercourse, sending throbbing pain throughout your breast tissue. It happens. Thankfully, there are ways to alleviate the pain that sex can become postpartum. According to The Journal of Perinatal Education, it helps to try to schedule sex for the time directly after you feed your baby or pump so that it would take significant stimulation before the effects of oxytocin would be felt in the breasts, and make them ache or leak.

You can and should inform your partner of the discomfort you're feeling and motivate them to explore other erogenous zones on the body instead of singling in on your breasts. If there was ever a time to get creative, this is it. But remember, if you're not feeling it, you're not feeling it, and that's OK. There are other ways to be intimate with your partner than sex. However, if it's really bothering you, talk to your OB-GYN about it. They might have some strategies you've never considered. It's worth a try, right?