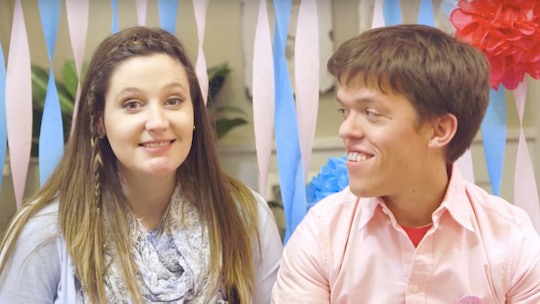 People are used to seeing the Roloff family on their TV screens on TLC's Little People, Big World. The family and their shenanigans on their family farm in Oregon captured the attention and the hearts of so many viewers years ago when it first aired in 2006. And the Roloff family seems to keep expanding with the children of the family getting married and having kids of their own. When Zach Roloff and his wife, Tori, welcomed their first child, Jackson Roloff, last year, fans fell in love with the little family. But the question exists — do Zach and Tori Roloff want more kids in the future?

Although nothing is certain, fans could be seeing a new Roloff on the way pretty soon — at least that's what a recent Instagram story of Tori's would suggest, according to In Touch Weekly. On Monday, Tori reportedly posted an Instagram story of her holding her son and a friend's kid. The caption? "I could definitely have a second kid" followed by the smirk emoji. That definitely sounds a little bit like Tori wanting more kids. I mean, how could she not want more kids when she has a son as cute as Jackson?

Roloff's comments in her Instagram post on Monday definitely match up to her comments in the past. Both she and Zach really do want more kids one day.

In 2016, during an episode of Little People, Big World, Tori revealed to her father-in-law, Matt Roloff, that her and Zach wanted a lot more kids, according to People. Tori told Matt that she and Zach couldn't exactly agree on how many kids they saw in their future — "depends on if you ask me or Zach," Tori told Matt, according to People. However, she did reveal to Matt an estimate of how many kids they saw in their future. "I say two, he says four, so we're thinking we'll meet in the middle and go three," Tori said. Sounds like a fair enough compromise to me.

But it's understandable if Tori and Zach want to wait a little while before trying for another. Jackson turns 1 year old in May and judging from Tori and Zach's Instagram accounts, they can not get enough of their little boy. So it's understandable if they want to spend a little more time enjoying every moment they can as parents of one. But at the same time, Zach is used to having a lot of company around the house — he comes from a family of four, according to People, and has a twin brother, Jeremy. With him being so close in age to his siblings, he might want his son to have the same experience that he did.

Although their Instagram makes parenting look easy, that wasn't exactly the case when Jackson was born. During a recent episode of Little People, Big World, Zach and Tori were open and super honest about their struggles as first-time parents, according to Us Weekly. Zach said in the episode, according to Us Weekly:

It's definitely been a huge adjustment. I love it so far but those first couple of weeks were rough. I'm up 'til 4 in the morning, trying to put this guy to sleep while [Tori's] getting some rest. I don't do well with little sleep.

"Being a mom is really fun but exhausting," Tori added, according to Us Weekly. She isn't wrong about that — and being a mom of two only doubles that exhaustion and fun. But Zach and Tori are only in their 20s and have plenty of time to plan out when their next addition will come or decide if that is something they see in their future. And given Tori's most recent comments, another kid could be here a lot sooner than fans might expect.