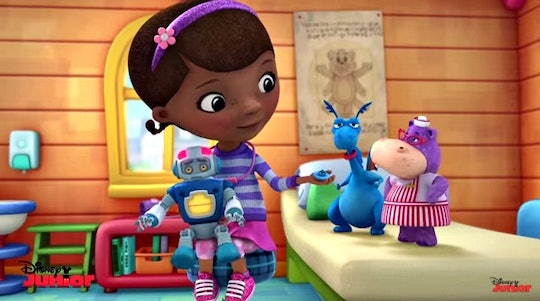 'Doc McStuffins' Might Be Cancelled & Parents Are Not Happy About It

It's never good news when a network takes their sweet time to renew a favorite show. On Saturday, many parents took to Twitter to let Disney Junior know that they were upset that it looks like Doc McStuffins might be cancelled. You won't have to sit your kids down just yet to break it to them, but since the Upfronts this spring, where the networks make big announcements about new and old programming and boast about ratings to lure major advertisers, there has been no official word if the doctor will be in for a fifth season yet. The network announced new shows, like Vampirina, which will be produced and directed by those behind Doc McStuffins, actually, and Puppy Dog Tails, about two puppy buddies that sounds absolutely delightful (because seriously, puppies.)

In fact, there are a couple of great new shows for families coming to the network but the lack of official word about Doc McStuffins has some parents a little worried. The show, for the uninitiated, features a little girl who talks to and heals her stuffed animals and toys from her backyard. And not just that: it's a cartoon about an African American girl who is a doctor. If they take it off air, kids are left with no other female characters of color who have big dreams.

One user tweeted, "My son thought anyone can be a nurse but only girls can be doctors because of his favorite show." Now that is pretty powerful. When have you ever heard of anyone thinking that only (black!) girls could be doctors? Talk about dismantling the patriarchy and racial stereotypes.

Because representation does matter. Sure, all kinds of kids seem to love the show, as The New York Times reported, but she's the first (and only) African American child character on TV to "crossover" to broader audiences. Last year, Doc dolls and other merchandise earned the network $500 million in sales. That's what those in the business call a "freaking hit." Chris Nee, the creator of Doc McStuffins said that she has broad appeal. "The kids who are of color see her as an African-American girl, and that’s really big for them. And I think a lot of other kids don’t see her color, and that’s wonderful as well," she told the news outlet.

Experts say that many children do prefer toys that look like them, but Doc is more than just a doll or a cartoon. She's a role model. One user tweeted that on top of just being awesome, "she's embraced her natural hair, met the FLOTUS, and has a stay at home dad." It's 2016 and America needs Doc McStuffins for so many reasons.

Other parents (and even some non-parents) took to Twitter to show Disney Junior that little people everywhere are empowered by the character.

A little black girl, who is a doctor, and has a stay at home dad, has stolen the hearts of kids of all races and genders and that needs to be on TV. I mean, Nickelodeon's Dora The Explorer has been on since 2000. Surely, Doc, her toys, and family deserve a little more screentime. At least until we get these toddlers with stethoscope obsessions into STEM fields and a few other characters of color on children's networks? Is that too much to ask?

Disney Junior, do the right thing.