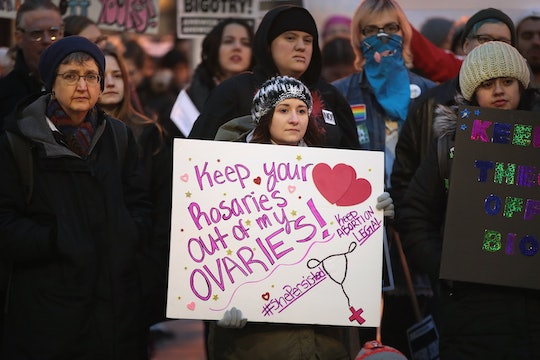 Every woman deserves the right to choose, especially when it comes to her own body. In the event of an unplanned pregnancy, having the ability to decide whether or not someone wants to be a mother should be a given right to all women. It's incredibly infuriating when people try to stop this. For example, an Australian doctor allegedly refused a woman's abortion request because she was "meant" to be a mom, which, aside from being outlandishly terrible (if true), is just downright disheartening.

More Like This
11 Candid Moments From Prince Harry’s Interview On Dax Shepard’s Armchair Expert
15 Of Chrissy Teigen’s Best Quotes On Motherhood
Everything There Is To Know About The Friends Reunion
Apple Card Family: How It Works & What Your Kids Can Learn

The 31-year-old Queensland, Australia woman told BuzzFeed that she went to her doctor, who had been prescribing her birth control for years, and said that she needed an abortion. Instead, the doctor's reply was something that no woman should ever have to hear — according to BuzzFeed, he allegedly told her that the pregnancy was the "world's way" of telling the woman she was "meant to be a mother" and that she would have to continue her pregnancy. The doctor also allegedly refused to help her find an abortion provider.

Because the woman didn't reveal her care provider's name or place of work, it's difficult to corroborate her story. But even without knowing if it is, indeed, a real incident, the fact remains that there are plenty of care-givers and legislators here and abroad that are striving to do exactly what she claimed — just not necessarily with so many blatant words. (Romper has attempted to reach out to the woman for confirmation.)

This woman's alleged encounter is something that many women unfortunately experience to this day — not just in Australia, but in the United States. Although abortion remains in the criminal code in Australia, abortion is legal in the United States. But that legality has not stopped politicians from trying to limit access to the safe and legal procedure in the first place: Politicians have repeatedly threatened to cut funding to Planned Parenthood and some states have limited the ways a woman can get an abortion by only having one abortion clinic open for all of the state's residents. And those are just two large-scale examples — oftentimes, attempts are much more subtle.

In late 2016, for instance, a U.S. district judge ruled that doctors can refuse to see a patient because of the doctor's own religious beliefs. This allows doctors to refuse to treat transgender patients, patients who wish to have an abortion, or to treat patients who had an abortion, so long as it's because it would go "against their religion." Under President George W. Bush's administration in 2008, Republican lawmakers also proposed a bill allowing those who work in health care to refuse to participate in abortions due to their own religious or moral objections, but thankfully, it never passed.

Researchers have found that when women are denied abortions, it can cause lasting results. A study conducted by researchers at the University of California, San Francisco — called the Turnaway Study — focused on women who were turned away from getting an abortion. The study found an immediate increase in anxiety from women who were turned away from having one, according to Business Insider. Additionally, the results found that these women experienced emotional and physical abuse following their pregnancy and were more likely to stay in an abusive relationship. A study in Sweden found that children born after denied abortion fared worse than their peers, according to The Huffington Post. But when women are allowed to have abortions, according to Business Insider, research has found that women feel relieved.

Every woman deserves the right to choose whether or not they become a mother — without the influence of others' opinions.