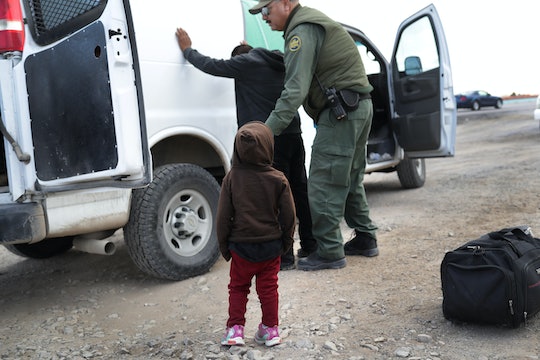 The stories, like the images, are deeply disturbing. And new and ever more painful bulletins never seem to stop arriving, reminding us that immigrant families are facing horrifying obstacles as they try to seek safety and refuge in the United States. And one doctor in the midst of trying to manage the crisis among this vulnerable population warns that we may never have a true grasp of its impact.

"I’m afraid that there will never be a way for us to have a complete understanding of what has happened with these children for the last few years," Dr. Marsha Griffin, co-chair the of American Academy of Pediatrics (AAP) immigrant health special interest group, tells Romper. "The problem is that the agency on the front lines of all of this, CBP (U.S. Customs and Border Protection) — they're completely ill-prepared to take care of children."

Griffin — also the Director of the Division of Child and Family Health at the University of Texas Rio Grande Valley School of Medicine and the co-founder of non-profit Community for Children — says law enforcement officers are being tasked with responsibilities far outside their core competencies. "Since 2015, they have been saying that they are ill-prepared to take care of children and that they would rather not," Griffin says of CBP. "And despite our recommendations to reorganize, they continue to be the ones who are on the front lines taking care of children."

She continues, "They would rather be law enforcement, go after the bad guys, which is what they’re trained to do, but there just aren’t that many bad guys coming over the Southern border. We're seeing so many families and children."

Aid organizations like the Catholic Charities Rio Grande Valley Humanitarian Respite Center, where Dr. Griffin sees patients, are desperately trying to address the families' most desperate needs after they're released from detention. Griffin says they "work with border patrol," so after they're dropped off at the center, volunteers will provide them with "a hot meal, clothes for the road, hydration, and medical care."

Griffin says that her center receives a lot of children who have colds and coughs that are troubling, but have been judged too mild to land them in the hospital. "Border Patrol wants to give them a place that’s not a concrete floor with a Mylar blanket, so they bring them to us," Griffin says. "When a doctor has seen them in custody, they say, 'It's just an upper respiratory infection.' It rarely is, because the children's immune systems are so depressed, plus they are dehydrated, and in some cases, malnourished."

Shocking conditions in detention centers have been widely reported. For example, the Chicago Tribune noted immigrants have referred to their cells as the "hielera" or "icebox." Recently, according to the Associated Press, lawyers reported on "inhumane treatment of children in federal immigration custody," noting frigid temperatures and a pregnant mother who had the flu. Earlier in June, The New York Times reported that a 4-month-old baby named Constantin was the youngest child to be separated from his parents. He spent five months in a foster home and reportedly did not recognize his parents when they were eventually reunited. According to New York Times reporter Caitlin Dickerson, "Now more than a year and a half old, the baby still can’t walk on his own, and has not spoken."

Romper's request for comment from U.S. Customs and Border Patrol was not immediately returned.

Constantin, however, is far from alone. As NBC News reported, the Trump Administration's "zero tolerance" immigration policy — which was in effect from May 2018 to June 2018, when President Donald Trump signed an executive order ending it — resulted in more than 2,800 children separated from their parents. And in May 2019, according to CNN, it was reported that an additional 1,700 children may have been separated from their parents before the "zero tolerance" policy was put in place.

Trauma from detention doesn't end when immigrants are out of federal custody, though, and can be devastating for those who have returned to their country of origin. According to a report from the Congressional Research Service report, immigrants hailing from Central American nations — particularly the "Northern Triangle," which includes El Salvador, Guatemala, and Honduras — suffer from extreme poverty and are fraught with the political and judicial instability leading to increased criminal activity.

As such, Griffin states that they don't have the capabilities needed to care for the kind of complex post-traumatic stress faced by the returnees, especially the children. "I talked to an indigenous Guatemalan caregiver the other day in collaborating on the situation with some families who'd been deported back to her care," Griffin says. "She told me they're simply not prepared for what they’re seeing in people who come back there. She said that they come back and their souls are gone."

Griffin continues, "From a clinical standpoint, they’re not prepared to know how to bring that vitality back. We’re culpable for that individually and as a nation. We’ve oppressed them simply for seeking safe haven."

Things are desperate, but there are ways you can help. Dr. Griffin suggests that both activism and charity begin at home, and it's incumbent on all of us to first make ourselves aware of what agencies in our own communities are doing to assist immigrant families.

"Our center is of course partnered with Catholic Charities, so that is a good place to start. The Lutheran Immigrant and Refugee Service does a lot of good work. The United Methodist Church also has a refugee and immigration arm," Griffin shares, adding that you can also look up local organizations in your community or just reach out to United Way for guidance. Griffin also says that her own facility, the Catholic Charities Rio Grande Valley Humanitarian Respite Center, will put donations toward its staffing program to hire more medical providers.

While activism is necessary, as Griffin urges, it's also important to recognize the humanity and common struggles behind this crisis: "A mother is a mother is a mother. It’s universal. The mothers coming from Central America are no different from the mothers in Greenville, and Portland, and Omaha. They care, and they struggle, and they weep, and they would give anything for their child."