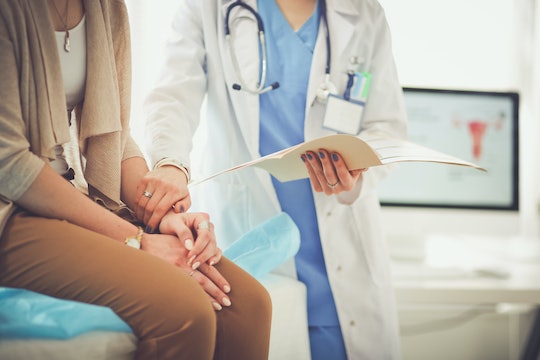 For many women, experiencing a miscarriage is a devastating loss, especially if the pregnancy was planned. Miscarriages happen for a variety of reasons, and by no fault of the person carrying the child. But myths and misinformation still persist around pregnancy loss — so much so that even doctors continue to give women misinformation about miscarriages, according to new research.

A new survey published Wednesday by Ava, the fertility tracking bracelet, found that health care providers in the United States still tell women who've experienced pregnancy loss to wait a while before trying to conceive, according to The Los Angeles Business Journal. Specifically, about one-quarter of the more than 2,500 women surveyed by Ava said that their doctors told them to hold off for "several months or more" after a miscarriage if they wanted to try and become pregnant again, the study's findings show. That's despite medical research that has shown that it's safe for most women to try again relatively soon — within the first cycle, typically — following pregnancy loss, The Los Angeles Business Journal reported.

What's more: More than 30 percent of women surveyed reported that they were "not satisfied with the care" they received from their health care provider following their pregnancy loss, the study's findings show, according to The Los Angeles Business Journal.

The fact that doctors are still giving women inaccurate advice regarding the length of time to wait following a miscarriage to try again, is particularly unfortunate given 67 percent of those we surveyed said they’re eager to "try again right away" to get pregnant, is extremely unfortunate.

Even worse, this advice may be hurting women’s chances of conceiving another healthy pregnancy.

The World Health Organization recommends that women who've experienced a miscarriage wait at least six months before trying to conceive again. But a 2010 study published in The British Medical Journal found that people who become pregnant within that six month period — rather than after it — have the best chance of having a pregnancy that's healthy with the lowest rates of complications.

The authors did note in the study that, for women in developing countries, the WHO guidelines "may still be appropriate" because of the lack of accessible, quality medical care. But, overall, the recommendation to wait at least half a year before trying to conceive after a miscarriage may not be justifiable for most women, the researchers wrote in the study.

The researchers reviewed health data of over 30,000 women in Scotland from 1981 and 2000, and found that those women who became pregnant again within six months after a miscarriage were less likely to experience another pregnancy loss, pregnancy termination or ectopic pregnancy. Women who conceived again between 6 and 12 months after a miscarriage, however, were more likely to experience these complications, according to the study.

The authors said in their report that the WHO recommendation is "particularly problematic" in the western world, according to ScienceDaily, because "women over 35 are more likely to experience difficulties in conceiving and women aged 40 years have a 30 percent chance of miscarriage, which rises to 50 percent in those aged 45 years or more."

The authors continued, according to ScienceDaily:

Any delay in attempting conception could further decrease their chance of a healthy baby.

For women planning a family, experiencing a miscarriage can be incredibly painful, both physically and emotionally. And the last thing doctors should do is tell those women inaccurate information about their reproductive health, and realizing the dream family that they want — while potentially putting their health at risk.