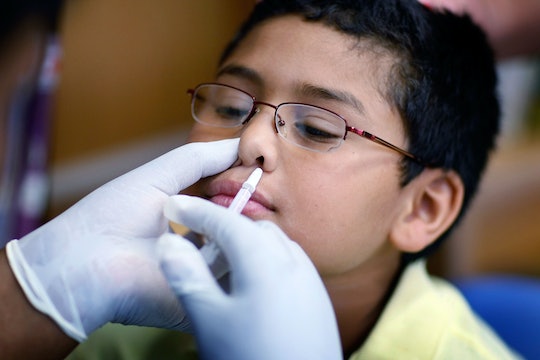 As if parents and children needed one more reason to be upset about the impeding flu season, another one has been added to the list. And it's particularly bad news for young kids who are uncomfortable with needles, which, in reality, is most kids. Pediatricians from the American Academy of Pediatrics released a statement saying doctors do not recommend the flu vaccine, FluMist. The nasal spray is the only vaccine on the market that is administered without a needle. And although the idea of a needle-free shot sounds awesome, it may not be as affective as one would hope.

Dr. Henry Bernstein, who co-wrote the statement from the AAP, told NBC News that doctors certainly recommend the flu vaccine — just not the nasal spray available on the market right now.

"Not having the option of receiving a flu vaccine intranasally or a nasal spray is disappointing to some but I think that people recognize that flu vaccine is the best preventative measure that we have to protect everyone against influenza."

AstraZeneca, the company that manufactures FluMist, did not immediately return Romper's request for comment.

The Centers for Disease Control and Prevention had already warned against the effectiveness of the drug, saying it "barely protected" people from the flu in past years. Now, with pediatricians jumping on board, it's a hard warning for parents to ignore. But the spray isn't that easy to find, either. Clinics have not been ordering it, and the Target and Rite Aid are the only major pharmacies where the vaccine is available, according to FluMist's website.

Vaccine experts are saying they're not sure why the vaccine doesn't work, but that studies of the vaccine's effectiveness have shown a reduction in risk of only about 3 percent. Because flu vaccines include combinations of three or four strains, they are particularly complex to make, according to NPR.

There are multiple strains of the virus, and the virus is extremely susceptible to mutation, so they can change every year. That's why there are brand new vaccines made everywhere, and why no one can be sure which strain will dominate in any given season. So the flu virus is particularly unpredictable. And because it's been proven that the shot works well, pediatricians strongly recommend it, according to the International Business Times.

Basically, pediatricians are saying they're not exactly sure why, but there's really no escaping the shot, at least not this year. But skipping out on the shot entirely isn't a good idea, so people have no choice but to get the flu vaccine administered intravenously. I'm hoping for better luck next year and, in the meantime, I'll be preparing myself for the needle.