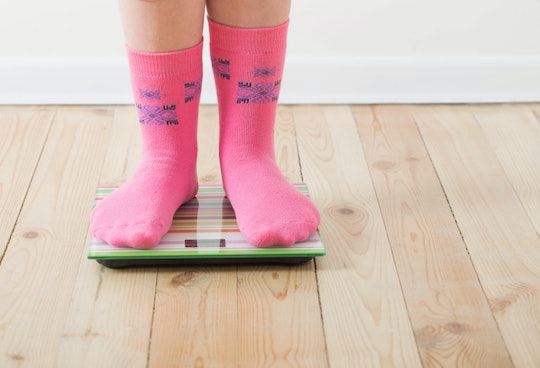 Fat-shaming is such an ingrained part of our culture that, if you're not at the receiving end, it's unfortunately easy to not notice it or to dismiss is as good-natured teasing. But such shaming — whether it's at the hands of family members or peers — can be particularly devastating for young people. That's why doctors are warning against shaming kids for their weight. Obviously, that should go without saying, but enduring jabs, straight-up malicious bullying, and even well-meaning talking-tos about excess weight have long been a normal part of life for kids who are fat. And it can have serious lasting negative effects on both their health and well-being, according to a new joint policy statement from the American Academy of Pediatrics (AAP) and the Obesity Society.

It's hardly news that obesity, the medical diagnosis, is a widespread and growing problem among kids in the United States, with one-third of those between the ages of 2 and 19 officially classified as either overweight or obese (though not everyone who is classified as overweight is obese). Just as strikingly, that rate has tripled between 1971 and 2011, according to the American Heart Association. But the resulting dangers to these children don't stop at the physical problems they can face as a result of obesity, such as asthma or high blood pressure. In addition, the shaming children with obesity face could contribute to negative behaviors such as binge eating, social isolation, and inactivity, the AAP/Obesity Society statement reported.

The AAP and the Obesity Society are encouraging doctors to educate families about how to talk to and about their kids with obesity — as well as how to address their weight constructively. Perhaps the guiding principle of doing that is to highlight health and promoting healthy behavior during all conversations about weight. Also, it's important for parents and physicians to use neutral words, like "weight" and "BMI" (though BMI isn't always an accurate indicator of health), when talking about a child's weight, and avoid ones such as "obese." As Dr. Stephen J. Pont, an assistant professor at the University of Texas Dell Medical School and one of the lead authors of the policy statement, told The New York Times, saying "a child with excess weight" instead of an overweight or obese child can also make a difference. Using person-first language, where you say "a child with..." instead of "an obese child" is incredibly important.

Pont suggested getting the whole family involved in adopting a healthier lifestyle — through changes such as incorporating more veggies into their diets and nixing sugary drinks from their grocery lists — as a great way to avoid singling one kid out. It's also essential to always remember not to define kids by their weight, he said, according to the Times:

Recognize that a child is far more than what their weight is, praise them for all the positives, so when we get to some of the more challenging topics, they can still maintain their self-esteem.

Additionally, there are ways for parents to leverage instances of real-life fat-shaming to teach kids — both those who with obesity and those who don't have the diagnosis — about why such statements and behavior are not OK. Another recent study, for example, found that many popular children's movies stigmatize fat and fat bodies. So, parents who watch such scenes with their kids can start an open and body-positive conversation with their kids. Dr. Eliana Perrin, who coauthored the study and serves as director of the Center for Childhood Obesity Research at Duke University in Durham, North Carolina, suggested the following dialogue to Reuters:

We all laughed when so-and-so was made fun of, but I was thinking it really wasn't funny for her, was it? ... In our family, I'd like us to be friends with people and kind to people no matter what their size. Children with obesity are smart, fun, athletic and hard-working.

Such concentrated efforts to take kids' mental health into account when addressing obesity as well as to promote healthy lifestyles can only benefit them.