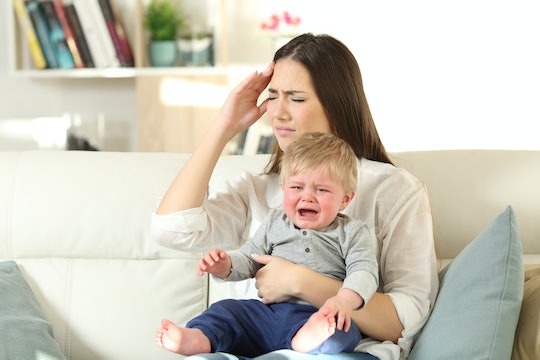 This Is The Postpartum Depression Symptom That Doctors Aren't Screening For

Along with feelings of joy and overwhelming love, new moms are bombarded with a slew of emotions that can include overwhelming sadness and anxiety. Increased awareness of the symptoms of postpartum depression and other mood disorders have led to more comprehensive surveys given at appointments. But along with these emotions, doctors should also be screening for anger in postpartum checkups, according to a recent study, because it, too, could be a sign of postpartum depression.

A team of researchers out of the University of British Columbia reviewed past studies and found that anger was a significant feature in postpartum mood disturbances, according to Science Daily. The review, led by UBC nursing Ph.D. student Christine Ou, was published in Birth and also found that moms had feelings of powerlessness, unmet expectations of support, and a perceived difference between the reality and their expectations of motherhood.

While anger is a normal and expected emotion, when one is more prone to anger than usual, it can be a sign of something else going on or an emotional reaction to an issue in their lives, said Ou, describing postpartum anger to Today's Parent as a "distress signal" in new mothers. Ou and her team specifically looked at the Edinburgh Postnatal Depression Scale, a screening that is widely used in the U.K. to determine which new mothers are struggling with PPD. Anger is not listed on this scale as a possible symptom of PPD.

Roughly 10 percent of new moms suffer from PPD, according to Baby Center, but that number may be even higher because many women don't seek treatment for their symptoms. Increased awareness of PPD may help spur more women to seek help, but Ou explained that researchers have overlooked anger in their studies, according to The Star. Additionally, when women are both depressed and angry, the intensity and length of their depression may worsen. As for why anger has not been as closely examined as other symptoms of PPD, Ou explained that anger is less socially unacceptable than some of the others — especially for women.

Carolyn Wagner, a licensed professional counselor who deals with postpartum struggles, described these feelings of anger in new mothers as postpartum rage, according to Motherly:

What on earth am I talking about when I say “postpartum rage”? I’m talking about overwhelming anger. Anger that is so intense it feels like it shouldn’t even be called just “anger.” The kind that sneaks up on you and before you know it, you are exploding.

New mothers can be angry about a variety of things, and they aren't always monumental. Wagner lists "minor annoyances" like dirty dishes and hitting red lights as setting off these fits of rage. But what is behind them? Science Daily reported that, according to Ou, possible explanations include broken expectations of motherhood or a lack of a support system:

Mothers may feel that they have not met their own expectations and that also others may judge them because, for example, they're formula-feeding instead of breastfeeding. Many mothers have also expressed feeling let down by others in terms of support from partners, family members, and health-care providers as well.

Like any other symptom of PPD, anger or rage can have real consequences. Along with causing distress, it can also negatively impact a new mom's relationships and make it difficult for her to interact with her child, according to Today's Parent. Additionally, children whose parents suffer from anger or depression are at a greater risk of developing emotional problems of their own.

For these reasons, Ou and her team are appealing to health care providers and other researchers to "examine maternal anger in the postnatal period in order to understand and manage that risk." So, if you're a new mother who is experiencing anger in a way that you don't understand or aren't used to, talk to your doctor.