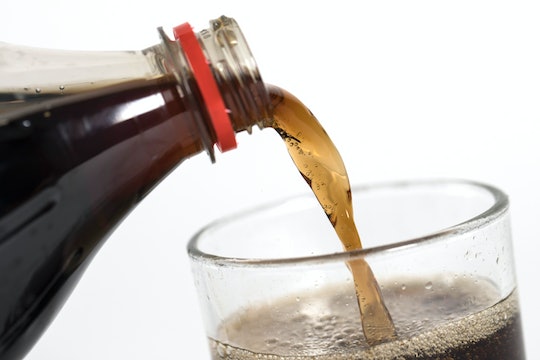 With as much as 39 grams of sugar in just one of these babies, you already knew a soft drink wasn't the best for you — and they're even worse for your kids. Well, now health experts are really chiming in about just how bad. And, as a result, doctors want sodas and other sugary drinks for kids to come with some additional limitations and restrictions.

As USA Today reported, the influential American Academy of Pediatrics has just joined with the American Heart Association in advocating for an additional tax on sugary drinks, with the intention of making it harder for kids and teens to get their hands on the beverages.

The two organizations announced the news with a joint policy statement outlining exactly why they feel it is more important than ever to limit the accessibility of this category of drinks to kids.

The groups wants healthy beverages such as water and milk to become the "go-to menu" item for young people on children's menus, in hospitals and at vending machines, and is also advocating for taxes and other policies that would make choosing a soda more of a deliberate — and costly — decision.

"This is a call to policymakers to take action," Natalie D. Muth, MD, lead author of the new paper wrote, said, as per USA Today. "Enough is enough. We really need bigger changes, more changes."

The new statement additionally notes that families receiving help from federal nutrition programs and those receiving school meals should be offered additional nutrional information and warnings about such dietary choices, and that federal and state efforts should bolster individual laws to limit consumption.

"On average, children are consuming over 30 gallons of sugary drinks every year. This is enough to fill a bathtub, and it doesn't even include added sugars from food," Muth said, per the AAP. "As a pediatrician, I am concerned that these sweetened drinks pose real — and preventable — risks to our children's health, including tooth decay, diabetes, obesity, and heart disease."

The AAP also noted the issue greatly affects youngsters from minority and low-income communities, in which sodas and sugary drinks including sports beverages are low-cost and readily available.

The idea of a tax on something that's not super healthy for you is hardly new. Fast Company noted that when individual municipalities such as Berkeley, California passed its own soda tax in 2014, consumption of sugary drinks plummeted a full 21 percent. Wow.

Meanwhile, Science Daily added, another new study shows that when the Berkeley tax was instituted, the effect was even more profound on low-income residents: A 52 percent drop in soda intake among such community members in three years.

And while USA Today noted that soda industry reps say a tax is not the answer, the Baltimore Sun, citing numbers from the Rudd Center for Food Policy and Obesity, detailed that most teens see one or more soda ads a day.

Further, the paper noted that beverage companies spend major bucks ($866 million in 2013, for example) to market to young customers.

So clearly, this is a huge problem and the beverage industry may need to be curbed with more efforts to make its products pricier and harder to get.

Such a strategy worked to curb tobacco use, USA Today added, and the AAP and AHA clearly know that.

Meanwhile, other cities and states are mulling related measures, including several ideas in California such as banning soda displays near checkout stands, Fast Company noted.

Seattle and Philadelphia have also given the idea a try, USA Today added in another story — this despite legal challenges from beverage retailers and distributors in Philly's case.

I, for one, have zero problem with interventions at public-policy and governmental levels to make unhealthy things less available. As a mom, if I finally break down and let my kids have some sugar-soaked drink one hot summer day, I truly won't mind paying a tad more. I'm sure I can't be the only one.