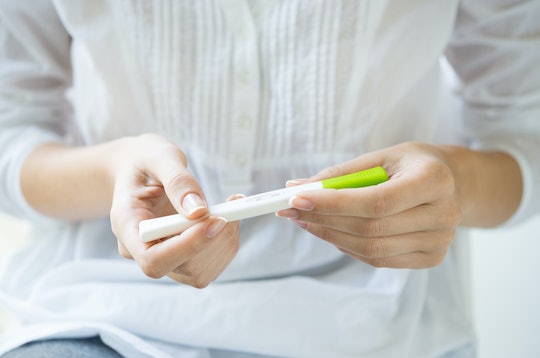 Aunt Flo is late. You've noticed a little breast tenderness. You cried yesterday for no apparent reason. After going back and forth over whether to grab a pregnancy test, you found yourself coming home with one in the bag. Once you finally got the guts to pee on the thing, you could barely bring yourself to look. Then you did. And it was... a maybe? No matter if you were hoping for a positive or a negative, getting an ambiguous result is stressful. Does a faint line on a pregnancy test mean you're having a miscarriage? Not necessarily, experts say.

Patricia Evans, a Certified Nurse Midwife in Fountain Valley, California tells Romper, "Early pregnancy tests are accurate and depend on the human chorionic gonadotropin (hCG) level. If you see a faint line on the stick it does not mean you’re miscarrying, but most likely your hCG levels aren’t high enough yet. Wait a week and retest."

While waiting an entire week to confirm whether or not your life is about to change may seem utterly impossible, it might be your best — and most timely — course of action. Making an appointment with your doctor to have blood work done can obviously give you a more definitive answer than that fuzzy pregnancy test, but you might not get an appointment for more than a week anyway. You'd better go ahead and buy that second stick.

If you're unfamiliar with hCG, it's a hormone your body begins to produce when you get pregnant. Made by cells formed in the placenta, hCG can be detected by an at-home pregnancy test as early as 12 days after conception. It escalates rapidly for weeks, reaches its peak near the end of the first trimester, and then drops a bit to remain steady for the rest of your pregnancy.

Evans points out that most miscarriages do not occur without signs and symptoms like vaginal bleeding, spotting, or severe abdomen or pelvic pain. Cramping and bleeding can vary in severity from woman to woman and may last several hours. If your pregnancy test shows a faint line and you aren't observing any of those symptoms, then your pregnancy is most likely coming along just fine.

Some women do experience implantation bleeding and mistakenly confuse it with a sign of miscarriage. Implantation occurs when the fertilized egg implants into the uteral lining, which, according to the American Pregnancy Association, happens between six and 12 days after conception. If a woman has taken a positive pregnancy test, this brown or red spotting or even light bleeding might be alarming. If you aren't sure whether or not you're experiencing bleeding from miscarriage, call your medical provider to be seen.

But if your first home pregnancy test is positive and you retest a week later to find a negative result, miscarriage is then a possibility you should begin to prepare yourself for. Fertility specialist Dr. Mark Trolice tells Romper that such early miscarriages are medically referred to as a biochemical pregnancy loss, meaning a pregnancy determined by urine or blood test that ends in miscarriage before the point of being detected on an ultrasound. "If a urine test is initially positive then turns negative, this is consistent with a biochemical pregnancy loss," he says.

If an ambiguous pregnancy test result has you worried, it can be really hard to wait for clinical blood work or enough time to pass to allow you another chance to pee on a stick. But if your initial test line showed up positive — albeit a little light colored — there is good cause to start celebrating now.