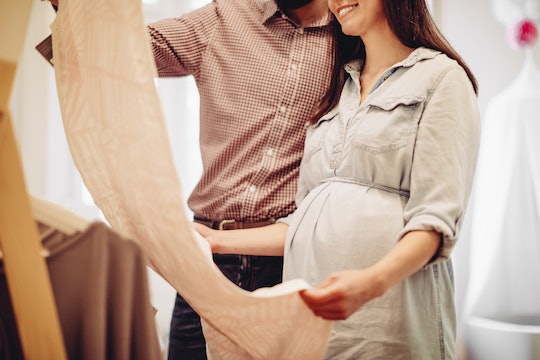 Far too many women live through the heartbreak of miscarriage, and there is a wide spectrum of healthy responses afterward. Some are ready to try again as soon as possible, while others may need to give themselves a long physical and emotional recovery period before seeking another pregnancy. But one common thread can be found post-miscarriage and that's the question, does a miscarriage affect future fertility?

Romper reached out to OB-GYN and author Dr. Sherry Ross of Santa Monica for a medical perspective. Miscarriage, Ross explains, is defined as the natural loss of a pregnancy before 20 weeks gestation, yet the vast majority happen during the first trimester. Over 85 percent of miscarriages occur within weeks six to eight of a pregnancy.

Ross tells Romper that maternal age, not a woman's medical history, is the biggest determinant of her risk for miscarriage. The average risk for a woman of childbearing years is 15 percent, but spikes up to 50 percent as she gets closer to menopause due to genetic abnormalities. Ross assures her patients that one miscarriage is no reason to fear the future, as it does not actually increase their risk of suffering another. In fact, she says, only two percent of women will experience two miscarriages in a row and more than two losses only occurs in a narrow one percent of women.

But although one miscarriage in and of itself does not increase a woman's risk of another, the medical procedure accompanying it sometimes can. According to Dr. Shahin Ghadir of the Southern California Reproductive Center, the process of cleaning out the uterus after miscarriage, generally called a "D and C" (Dilation and Curettage) can cause scar tissue if done too aggressively. In an interview with Romper, Ghadir emphasizes the need for a D and C to be performed cautiously and gently. If the lining of the uterus is scraped too aggressively, he says, the scar tissue may make future implantation and pregnancy very difficult.

Generally speaking, women who have suffered one miscarriage can be optimistic about their future fertility. With a supportive partner, caring medical provider, and positive outlook, they have every reason to believe that a sweet-smelling bundle of joy will be in their future.