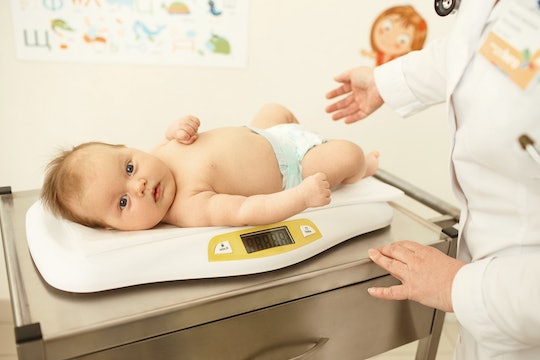 Does A Tongue-Tie Release Hurt?

A tongue-tie is a birth defect that can make it difficult for your baby to breastfeed, and may also cause speech problems down the line. For many, the tie resolves on its own. For others, a quick surgical procedure called a frenotomy may be necessary. Because any procedure that involves your newborn baby feels terrifying, it's easy to wonder, does a tongue-tie release hurt?

According to pediatrician Dr. Jarrett Patton of Pennsylvania, it's a lot like getting a shot. "A shot is a good comparison. The shot will upset them and they’ll be uncomfortable for those few seconds, but then the pain quickly subsides and goes away," he tells Romper in an interview. He explains that because tissue inside the mouth heals so quickly, the pain isn't long lasting. In fact, babies are usually given to their mothers to nurse directly after a tongue-tie release. Breastfeeding helps soothe them and speeds the healing process, says Patton.

So how common is a tongue-tie? Baby Center reported that tongue-tie is a matter of degree — and it's actually pretty common. About 4 percent of infants are born with clinically-significant tongue-tie, and the condition is believed to run in families. Patton explains that a frenotomy, performed for serious tongue-ties that might impact speech development or feeding, is a fast procedure that can be done in a newborn nursery. A doctor, often an Ear, Nose, & Throat specialist, will hold up the tongue and snip back the frenulum with a small pair of clippers. "Babies do well with minimal pain control," he says, adding that some doctors will use a bit of local anesthetic. Others will just get it over with, because babies recover, calming quickly, and even eating right after. There is a very low risk of complications.

Parents are understandably anxious about a procedure they themselves aren't likely to sign up for willingly. (Although some kind of do, if you count frenulum piercings, which according to WebMD, might not be advisable — tongue piercings aren't great for your teeth and gums.) Patton emphasizes that the procedure is quick and "relatively pain free ... Circumcision is much, much worse."

In fact, I'm picturing a line graph. A kitten is on one end, and a circumcision is on the other. A frenotomy to repair a child's tongue-tie is pretty close to kitten, along with the super-important flu shot babies get at 6 months old. I know, shots are no fun either, especially when your baby turns red as a tomato in dismay. In the grand scheme of things, it's a quick second of pain she couldn't anticipate, and will quickly forget. I'm still slightly nauseous before the fact, but that's a mom thing. I wish I could explain to her what's going on, but in actuality, my guess is that she's mostly feeling more surprise than pain. (After all, everyone in the office was so nice to her just a second ago.)

Literally 10 seconds later, she's getting a hug and a cherry-flavored tongue depressor, and she's all smiles in the car. All in all, she doesn't let it ruin her day. If a baby responds to a frenotomy the same way as they do to a shot, it makes sense to assume the pain isn't horrible.

Again, the majority of tongue-ties won't require a procedure, and may reverse themselves over time, explained Mayo Clinic. However, a severe tongue-tie can make breastfeeding impossible, and limit tongue motion to the extent that it impacts speech. Patton knows the procedure makes the few parents who have to go through it a bit squeamish, but takes care to emphasize that it's really OK. In this case, the benefit will well outweigh the risk.