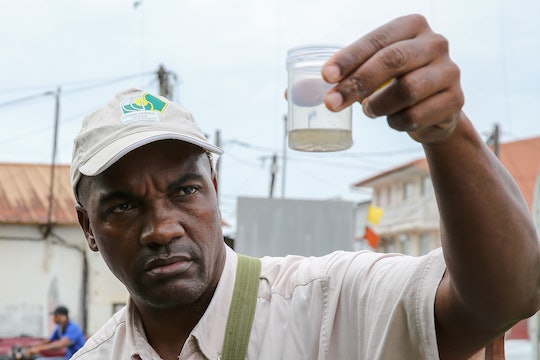 The outbreak of the Zika virus that occurred in Brazil last May has led to wide-spread fears about the virus, particularly as it carries the risk of a serious birth defect in babies when pregnant women become infected. As a result, the World Health Organization has declared Zika to be an international public health emergency, according to the New York Times, and women have been discouraged from traveling to Zika zones if they are or may become pregnant. But how do you know if you have the mosquito-transmitted virus? Does a Zika mosquito bite look different than normal mosquito bites? And what does it mean if you do have the virus, anyway?

According to the Centers for Disease Control and Prevention, Zika is a virus spread to people through bites from infected mosquitoes and is similar to other tropical diseases, like dengue fever. The good news is, for most people, Zika virus will do little harm: the symptoms, which include fever, rash, and joint pain, are usually mild and will clear up in a few days to about a week. But the bad news? For pregnant women, the virus could lead to the baby developing microcephaly, which is a serious birth defect that causes a baby's head to be much smaller than it should be. More bad news is that there is currently no vaccine, and you might not even know whether you've contracted the virus other than being tested — Zika bites look no different from regular mosquito bites, and most people who contract Zika have no symptoms.

How likely is it that an infected woman could end up with a baby affected by microcephaly? According to CBS News, a recent study estimates that approximately "one in every 100 pregnant women infected with the virus during the first trimester will give birth to a baby with microcephaly." Complicating matters further, according to the New York Times, is the fact that the Zika virus can also potentially be sexually-transmitted to women through semen of infected men (many of whom, again, wouldn't show any symptoms).

As the virus continues to spread, there are certain guidelines that everyone can try to follow to at least minimize the risk: according to CNN, travelers should consider delaying any trips to Zika hot zones, which include "South and Central America, central Africa, and South East Asia," particularly if they plan to have children. The New York Times also recommends standard mosquito-bite prevention techniques, such as"

Staying in screened or air-conditioned rooms or sleeping under mosquito nets, wearing insect repellent at all times and wearing long pants, long sleeves, shoes and hats.

Even though the Zika virus is pretty scary, particularly for women who are, or could become, pregnant, until an effective treatment or vaccine can be found, trying to be as mindful as possible about minimizing risk and preventing bites seems to be the best way forward.