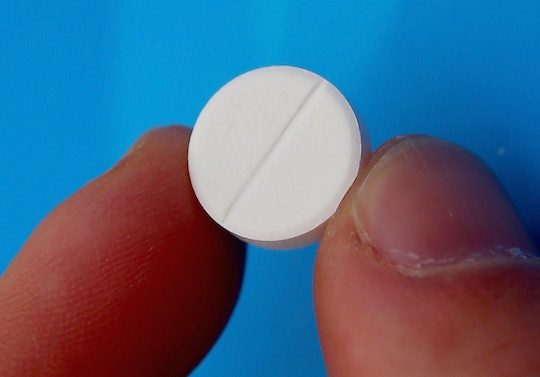 Does Acetaminophen During Pregnancy Cause ADHD In Kids? A New Study Links The Two

For years, acetaminophen, the active ingredient in Tylenol (also known as paracetamol outside the United States) has been recommended as the go-to pain and fever reducer for pregnant women. But a new study suggests a correlation between ADHD and acetaminophen use during pregnancy. Time to freak out? Not so fast. This isn't the first study to attempt to link acetaminophen use to children's neurodevelopment, and it certainly won't be the last, because even this latest one, published in JAMA Pediatrics, concludes that "further studies are required to replicate the findings and to understand mechanisms," which is the scientific way of saying *shrug*.

Dr. Hal C. Lawrence of the American College of Obstetricians and Gynecologists told CNN that the study failed to examine significant factors, such as the reason for acetaminophen use and the dosages taken, and cautioned, "Behavioral disorders are multifactorial and very difficult to associate with a singular cause." Although the study found that prenatal acetaminophen exposure was linked to an increased risk of "multiple behavioral difficulties," correlation is not the same thing as causation. Simply put, nothing has been proven yet, and so far, there's about as much evidence that acetaminophen causes ADHD as there is evidence that Lisa Simpson's rock keeps tigers away.

That being said (and please stay calm, pregnant readers), let's look at what the study did find. The data was gathered from the Avon Longitudinal Study of Parents and Children, focusing on 7,796 women that enrolled in the study between 1991 and 1992 (red flag No. 1). The women were given questionnaires regarding their acetaminophen use at 18 and 32 weeks gestation, and then completed another questionnaire to assess their children's behavior at age 7. Again, the children themselves weren't diagnosed by doctors or studied directly, but assessed by their own moms (red flag No. 2). The study found that the the 4,415 women who took acetaminophen at 18 weeks gestation were 1.42 times more likely to assess their children as having "conduct problems," and 1.31 times more likely to report "hyperactivity symptoms." Yes, those are decimal points, and that is red flag No. 3.

So what does it all mean? Statistically, nothing much. This study is possibly noteworthy to researchers who might be interested in conducting further studies, but there's no definitive conclusion to be made. For those who are comforted by anecdotal evidence, I can testify that my non-use of acetaminophen during pregnancy still led to a kid with ADHD, so you're damned if you do, and damned if you don't. And the FDA has found that current research is too limited to draw any conclusions on acetaminophen use during pregnancy. They also warn that "pain that is not effectively treated during pregnancy can result in depression, anxiety, and high blood pressure in the mother," which are definitely not good for babies. The bottom line is that all medication use during pregnancy should be discussed with a medical professional, who will most likely be just fine with a couple of Tylenol every now and then.