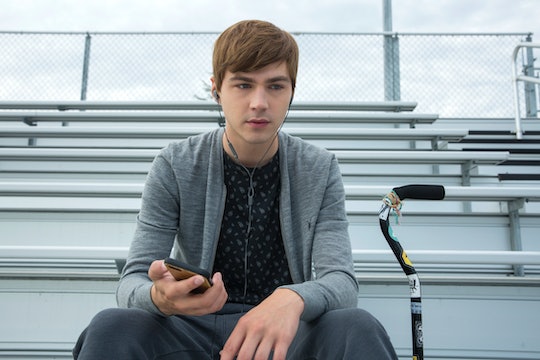 Alex Faces A Major Obstacle In '13 Reasons Why' Season 2

Warning: spoilers for Season 2, Episode 3 ahead! When Season 2 of 13 Reasons Why began, all of the characters were trying to recover from the events of the first season, Alex Standall included. He had attempted suicide in the finale but had no memory of the weeks leading up to it, which has left him frustrated and confused about what was going through his mind at the time. It seems like Alex needs to understand what he went through before he can move on. But does Alex get his memory back on 13 Reasons Why? Remembering could help him find closure.

It's possible that he will get his memory back in future episodes, but as of Episode 3, Alex still doesn't remember. He's only heard about everything secondhand, from his parents or his friends, and that just seems to have left him with more questions. The more information he has, the more he wants to know, and he doesn't appreciate people trying to protect him by keeping things from him. Unfortunately, nothing has been able to unlock his memory so far, not even photographs of him from the immediate aftermath that Tyler took in the hospital (when will Tyler get a talk about boundaries, by the way?) or the note Alex had written before his attempt. Alex might never remember, or it might take something else to help him access those memories.

It does seem like the people surrounding Alex are hesitant to expose him to too much out of fear of hurting or overwhelming him, which makes sense considering everything he'd been through. His mother reluctantly showed him the note he'd left, but reading it didn't make things any clearer for Alex. He was confused by what it said, especially one line about how he "could have stopped it." In the present, Alex has no idea what that refers to, though he seems certain about what it wasn't referring to. His mom and Clay suggested that he thought he could have stopped Hannah's suicide, or perhaps he just had a more general sense of guilt over not being there for her. Alex thought otherwise.

Whatever it was, it had to be information Alex learned in the month before his attempt, because that was the window of time he couldn't recall. In the first three episodes, it seemed like he was counting on Hannah's tapes to help him remember, though he couldn't get ahold of a copy of them. By the end of Season 1, a non-cassette recording did exist, because a digital version was passed along to Hannah's mother, but it might be difficult for Alex to get, especially now that the tapes are evidence in the Bakers' lawsuit against the school.

If Alex does manage to listen to Hannah's tapes again, it might help bring back some of the memories he lost. The episodes definitely seem like they're leading to him having a breakthrough of some kind, especially because there have been several significant looks exchanged between Alex and Scott Reed, another member of the Liberty High baseball team. Scott is a new character so it's difficult to figure out how he fits in, but Alex seems to know something about Scott that he just can't put his finger on.

Scott might be connected in some way to what's going on at school, but that can't be confirmed or denied yet. The show appears to be implying that Alex knows something about the culture of bullying and assault at Liberty that hasn't been revealed yet, not even to him. Alex might get his memory back at some point in Season 2, but in the early episodes he's just as lost as the audience is.