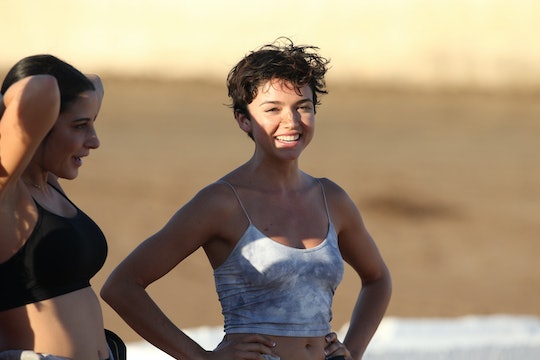 Bekah's Age Will Be Brought To Arie's Attention On 'The Bachelor'

The Bachelor teased that age would be a point of contention among the women this season, with 36-year-old Arie Luyendyk Jr. as the lead. Already people have been talking about 22-year-old Bekah's relative youth, and whether this would be an issue for her going forward. So does Arie know Bekah's age on The Bachelor? A preview for the upcoming episode promises that her date of birth would at least be a discussion between both her and Arie and among the other women in the house as well.

Bekah's age first became a subject of speculation when it became apparent that she was the only contestant on Arie's season whose age didn't appear below her name or on her bio on the ABC site. Internet sleuths quickly figured out that she is 22 based on her Instagram posts, and Bekah herself mentioned her age during the premiere. It's becoming rapidly clear that Arie is getting closer to Bekah (I am already in love with her) though it's less clear whether the 14-year age gap between them will become a problem or not. In fact, I'm not even sure Arie is aware of the significant difference in their ages.

In the preview, Bekah straight up asks Arie whether or not he knows how old she is, just as it looks like they're getting closer, in what ABC has termed "The Bekah-ning." Side note: yikes.

"Not sure if she's mentioned her age yet," Chelsea is shown saying in an interview segment, followed immediately by Arie saying, "I see myself falling in love with her." Cue the dramatic music as Bekah says, "Wait, do you know how old I am?" The implication is clearly that Arie doesn't know how old Bekah is, and the show wants the audience to wonder whether or not Arie will care. From the very beginning, the show has promised that Bekah's age would be a point of contention in the house, though Arie himself has said that age doesn't matter to him.

Us Weekly reported that a source claimed the tension in the house would have a lot to do with age. "It’s the younger women versus the older women," the source said. It should be noted here that I do not condone in any way pitting women against each other because of age or any other superficial quality, especially when they are already competing against one another for the attentions of one man. However the same article reports that Arie had stated, "I’ve dated younger, I’ve dated older, so yeah, that’s something that definitely I think plays a theme throughout the season, but it’s just more about being ready, that’s the most important part, being ready to get married."

In another preview, it looks like Krystal is another contestant who might have an issue with Bekah's age. "Arie's looking for a woman, not a girl," she says to the cameras, "And I want Arie to be able to see that." Krystal has already been established as this season's "villain," so it will be interesting to see how whatever she has up her sleeve plays out. Villains generally don't make it very far on The Bachelor, so I have a feeling her sneaky ways will backfire on her eventually.

In any case, when Arie does discover that Bekah is *gasp* 22 (only a year younger than some of the other contestants by the way), I seriously doubt that he's going to care one way or another. For what it's worth, if I was to choose between hanging out with Bekah or Krystal, I would far rather grab drinks and go rock climbing with Bekah. So Arie, if you need a second opinion, I've got it.