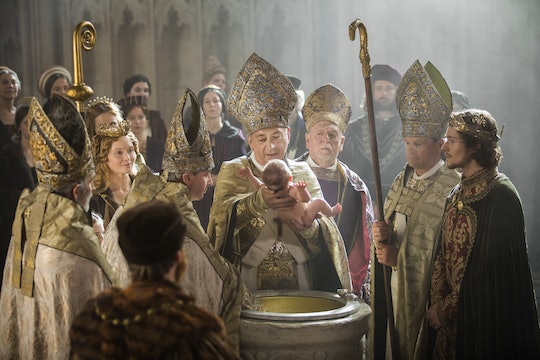 Arthur May Have A Bleak Future On 'The White Princess'

If you remember the international mania surrounding the births of Prince George and Princess Charlotte, I imagine the mania around births during Tudor England was similar. Well, they didn't have Facebook or push alerts back then, but I think the freak out over a new royal child was still intense. This can definitely be seen on The White Princess, where Elizabeth of York and Henry VII were pressured to have children immediately to secure their line. In the 1400s, though, the child didn't just need to be born — they needed to live. So does Arthur die on The White Princess? Henry and Elizabeth's son may be "cursed."

While The White Princess is based on the historical novels by Philippa Gregory, it depicts many true events that happened to Henry VII and Elizabeth of York. Arthur, Prince of Wales, was in fact their first child. He was born just 13 months after Henry won the throne in battle. Before he was born on the series, Elizabeth stated that he was cursed. He was born healthy, however, but was whisked away from Elizabeth right after he took his first breath. It's evident, though, that she has a deep love for Arthur, so is he seriously cursed and perhaps marked for death?

Jodie Comer, who portrays Elizabeth, agreed that Arthur is beloved by both parents. She told TV Line in an interview: "Baby Arthur bridges the gap between Lizzie and Henry. They both have a huge love for him, and they realize that once he’s born." It's unknown if the real Elizabeth had a premonition about her son, but she and Henry certainly had big plans. Before he was 3 years old, he was arranged to marry Catherine of Aragon of Spain to bridge relations between Spain and England. Arthur, however, never became king.

Unfortunately, Arthur died when he was a teenager. Shortly before his sixteenth birthday he suffered a "sweating sickness" and died. He and Catherine were married just months prior. Arthur was one of Henry and Elizabeth's children that survived childhood; only four out of seven did, and only three lived past them themselves. The White Princess may not show Arthur's tragic demise, but it does put a cloud on the happy parents' plans for him. Arthur is not destined to be Henry VII's successor, but perhaps the series will show the birth of the infamous royal who is: he and Elizabeth's next son, Henry VIII.