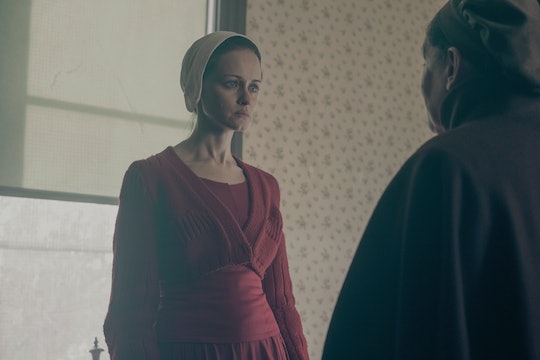 Aunt Lydia Might Not Survive On 'The Handmaid's Tale'

Warning: this post contains spoilers for the finale episode of The Handmaid's Tale

It certainly seemed like Emily was trying to kill Aunt Lydia, even though the outcome wasn't clear by the end of the Season 2 finale. Aunt Lydia had come to check on Emily after her first Ceremony at her new posting in the home of Commander Lawrence, the architect of Gilead's economy. Emily had been so terrified beforehand that she'd stolen a knife to defend herself, but Lawrence chose not to go through with the Ceremony. Despite that, he told Aunt Lydia that it had gone well. She congratulated Emily, but when she wasn't getting the response she was looking for (did she honestly expect Emily to be thrilled?), Aunt Lydia turned to her typical snideness.

She told Emily that she should be grateful for the opportunity to redeem herself for her past behavior, essentially calling her a pervert and a degenerate in the process. But Emily wasn't going to put up with Aunt Lydia's cruelties again and once she turned away, Emily grabbed her hidden knife and stabbed her in the back.

Emily didn't stop there, either. She unleashed all of her rage onto Aunt Lydia, punching her and pushing her over the second floor stair rail so she would crash to the landing below. The knife was still protruding from Aunt Lydia's back and she was clearly in a lot of pain, but she was still alive. But Emily wasn't done with her. She kicked Lydia the rest of the way into the foyer, then gave her a few more kicks for good measure. Aunt Lydia appeared to be unconscious by that point, but she wasn't dead.

It's possible that she might die from her injuries, but so far Aunt Lydia is still kicking. Before Emily was rushed away from the scene, the Lawrences' Martha yelled for an ambulance. If she receives medical attention, then there is a chance that Aunt Lydia will survive. However, viewers never actually saw the ambulance arrive or saw what Lawrence decided to do with Aunt Lydia. He's definitely not fond of her considering how short he was in "Postpartum," and his reaction to Emily's attempted murder was to get her safely across the border to Canada. He might not be inclined to help Lydia, which cuts her chances for survival.

Lawrence could be in a lot of trouble because of what happened in his house, regardless of what path he takes. If he reveals that his handmaid injured an aunt, then he'll have to explain why his handmaid is nowhere to be found. If he covers for Emily and conceals what happened to Lydia, then he'll have to explain why an aunt went missing. It's going to be a tough situation to get out of, especially if Aunt Lydia decides to rat on everyone involved. Which she definitely will.

The Handmaid's Tale does have a tendency to let characters survive even the worst situations, like how Janine recovered from her icy plunge in Season 1 and Fred bounced back from the explosion in Season 2. There will be a third season of the show and it sounds like Ann Dowd will be returning, according to an interview she did with Sandra Bernhard on the SiriusXM show Sandyland. So it seems like Aunt Lydia will indeed live to inconvenience people another day, despite Emily's best efforts.