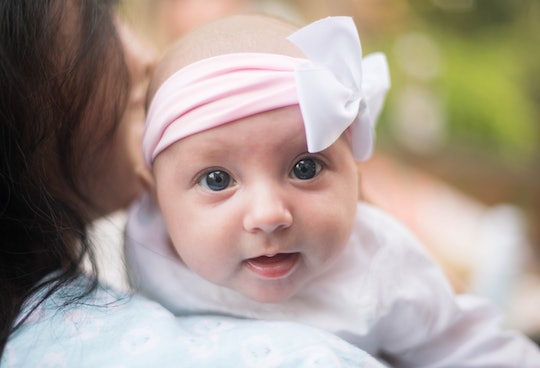 Teaching your baby how to communicate with you through baby sign language can definitely be an appealing prospect. When babies get upset, it's only natural that parents want to figure out what's wrong. And teaching yourself and your children baby sign language is one way to help expedite that process — and eliminate the mental anguish and frustration when you have no idea what your baby wants — when they're still too young to communicate with words. But how does communication using signs affect your baby's future speech development? Does baby sign language delay speech? Does it help make connections with words sooner? What's the deal?

Logically, you might think that teaching your baby how to communicate with others using baby sign language would mean that there isn't as much of a need or motivation to learn to communicate verbally. Dr. Lynn Mowbray Wegner, a spokesperson for the American Academy of Pediatrics and a practicing pediatrician in Chapel Hill, North Carolina, the NBC News website that baby sign language does not cause delays in speech development. Wegner said that the exact form of communication isn't what's important, but rather the fact that there's communication taking place is the most significant factor. Additionally, according to the Mayo Clinic, not only will baby sign language help ease your frustration at having no clue as to what your baby wants, but it can also help soothe baby's annoyance when he's old enough to know what he wants, but can't yet articulate it.

It's also important to note, however, that reviews of current research, such as the one conducted by Jennifer Paling at the University of Western Ontario, suggest that there isn't much solid evidence that infant sign language directly assists in language development and acquisition later on. According to Paling's review, there's also no solid evidence that baby sign language directly delays the development of verbal communication.

One group of kids who might directly benefit from being taught how to sign as babies? Those with autism. According to a 2002 study published in the Journal of Autism and Developmental Disorders, baby sign language helped expand communication for children who have autism. Some children with autism struggle with speech and communication issues, which gesturing can help combat. That's good news for parents and professionals who work with kids who have the disorder.

If you're going to teach your baby to communicate through signs, so as to try and avoid any interference with language development, Nicole Hess, a speech language pathologist, wrote in a post on Child-Psych's website that if asked, she tells parents that while signing is great and seems to help facilitate communication, including syntax in signing may cause a child to favor signing over speech because it's what he or she is most often exposed to at home. Additionally, in the aforementioned article from the NBC News website, Linda Acredolo, a psychologist and author, said that parents or other caregivers teaching babies how to sign should always speak the words aloud in conjunction with the sign. This way, babies will be able to begin to associate words they hear with the correct signs.

So, go ahead and teach your baby how to sign up a storm. Just make sure you keep talking to them, as well. Pretty soon, they'll be talking back.