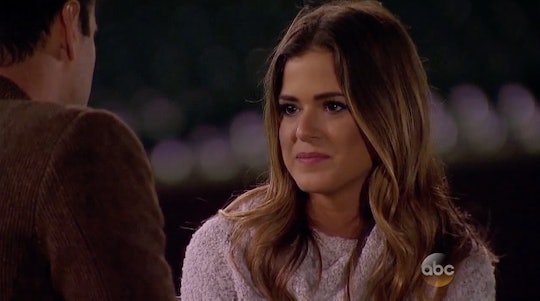 Does Ben Dump JoJo On 'The Bachelor'? It Seems Unlikely, But Anything Is Possible

The clock is winding down and things are heating up. With only three episodes remaining until the final rose ceremony, some viewers are beginning to wonder if Ben dumps JoJo on tonight's Bachelor episode. A recent promo for the episode showed that when Ben Higgins visits JoJo Fletcher's hometown, things get real between Higgins and Fletcher's brothers — and it may spell disaster.

In the promo, one of the brothers shouts at Ben, saying that he's "brainwashing" the girls. Yikes. Another image from the promo shows JoJo weeping, and then another clip shows JoJo walking dramatically away from Ben, with Ben saying "I can't do this right now." Uh-oh. That doesn't sound good. What, exactly, can't he do? He can't give JoJo another rose? We certainly hope he does, because Ben and JoJo seem like a nice couple. In fact, most predict that either JoJo or 25-year-old contestant Lauren Bushnell will receive a marriage proposal from Ben in the final episode.

The escalating competition between JoJo and Lauren has become the source of some interesting rumors about the season finale. Bachelor spoiler website Reality Steve has predicted that Bushnell will win, but on Jimmy Kimmel Live, Jimmy Kimmel predicted that JoJo will win—and he's been correct for the past three seasons.

It's a tough call. Suffice to say, things don't necessarily look good between Higgins and JoJo in the promo for tonight's episode.

Then again, Bachelor promos are notoriously misleading. Things don't really look good between Ben and any of the contestants in that promo. In particular, the relationship between Ben and esthetician Amanda Stanton might get dicey after Ben meets Stanton's two kids and possibly realizes that he's not cut out for instant fatherhood.

But what about Ben and Lauren, the real threat to JoJo? In the promo, there's not as much about Lauren, though they do briefly show her wiping a tear off her cheek, so maybe there's drama there, too.

Whatever the case, it seems clear enough that it will come down to JoJo and Lauren, so it seems unlikely that JoJo gets booted tonight, even if there are tears involved. Unfortunately, you can pretty much bet that there will be even more tears before this is all over.