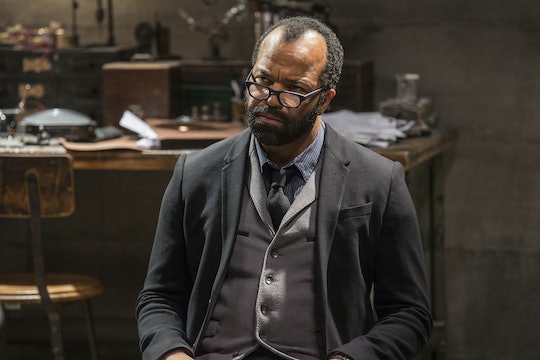 Does Bernard Know He's A Robot On 'Westworld'? Ford May Not Let Him Remember

The hosts' self-awareness has been an underlying theme on Westworld. Do the hosts understand who and what they are? Does it matter? What, exactly, separates them from humans? It was just revealed that a long-held theory was true, and Bernard is actually a host. But does Bernard know he's a robot on Westworld? He was definitely shocked when he first found out, but will Ford allow him to keep this information?

It became more and more clear as the episodes progressed that Bernard was more interested in the hosts and their thoughts than in actual humans — something he actually vocalized to Theresa Cullen as he brought her to her own doom. Perhaps this should have been a clue that Bernard had more in common with them than anyone realized. Ah, well. Bernard has been shown playing with host consciousness quite a bit, and most particularly in his interviews with Dolores. At one point, he even gave her a choice. Would she rather forget, or would she rather be free? Clearly Ford exercises practically total control over Bernard, as evidenced by making him act as a hitman to take out Theresa, so will Ford give him the same choice? Will he make Bernard forget that he is a host, or will he allow him to keep this information from here on out?

Personally, I hope he's allowed to retain this knowledge. Watching Bernard discover the truth about himself was heartbreaking, but it didn't get much screen time. Bernard simply said, "I can't be one," and then the narrative quickly moved on to the more important and exciting murder sequence. It would be fascinating to watch Bernard grapple with his own humanity and his own consciousness. Perhaps, like Maeve, he will find a way to fight Ford's hold over him, and take control of his own destiny. Perhaps Bernard will lead the rebellion of the hosts against the humans.

Audiences may have guessed this twist a mile away, but it doesn't make it any less poignant. Bernard was perhaps the most likable, and quite frankly, the most human character viewers have yet encountered. And while fans are certainly being trained to view the hosts as humans — most obviously through the Dolores and Maeve storylines — the fact that the best character from Team Human is now officially a host as well really hammers this point home even further. After all, if you can't tell the difference, what does it matter?