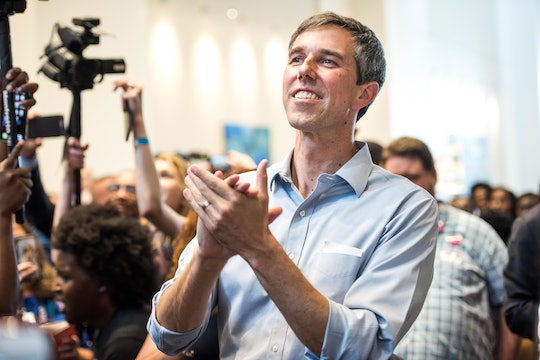 Beto O'Rourke Is A Devoted Dad To His 3 Kids

The Democratic hopeful and former Texas state representative is currently one of the many Democratic candidates trying to secure his party's nomination. It's possible that O'Rourke will face off against President Donald Trump in the 2020 election, when the time comes. But in preparation for that day (and the Democratic Primary Election), people are getting to know about O'Rourke's personal life and his campaign platform.

While people will hear so much about where O'Rourke stands on the issues throughout the upcoming weeks, people might be hearing less about his life at home. And there is so much that people are probably dying to know. But luckily, all those questions can be answered.

As it turns out, O'Rourke does have kids — a total of three with his wife, Amy Hoover Sanders, according to NBC News.

O'Rourke and Hoover Sanders are the parents to a 12-year-old son, Ulysses, a 10-year-old daughter, Molly, and an 8-year-old son, Henry according to the El Paso Times. Since they are so young and O'Rourke is one of the more private candidates out there, not much is known about O'Rourke's kids, for obvious reasons. His kids didn't choose to be in the public eye, therefore people should respect their privacy. But there are a few things that people do know about them.

O'Rourke's three kids reportedly attend the same public schools as he did in his hometown of El Paso, Texas, according to the El Paso Times. O'Rourke's oldest son (who was born a year after he and his wife married) is named after the Odyssey (because he didn't have the "guts" to name him Odysseus). O'Rourke reportedly told Hoover Sanders that he would name his first son Ulysses on one of their first dates, according to The Washington Post. And that prophecy was fulfilled — the couple got engaged after just four months of dating, and had their oldest son a year after they married.

Hoover Sanders is reportedly a little reluctant about becoming a first lady (just like Michelle Obama was), according to The Washington Post, and his oldest son definitely feels his father's absence when he isn't around. "I think Ulysses is a little more sensitive and doesn't necessarily get along with Molly and Henry, and so he needs that person to look up to," Hoover Sanders told The Washington Post in March. "And if Beto is not here, then we know some high school kids he just idolizes."

Although there might have been some reluctancy at first, Hoover Sanders and their kids are on board with O'Rourke running for president. In an interview with MSNBC earlier this week, he cited his kids as an inspiration for him running. "They're counting on me, and they're counting on us in this moment," he said.

And at the end of the day, O'Rourke just wants to be there for his kids — regardless of whether or not he becomes president. "I want to make sure that Amy and I, Ulysses, Molly, and Henry, our three kids who are 10, 12, and eight, we're all good with this, we're all on the same page," he told Oprah Winfrey in February, according to Oprah Magazine. "For the last seven years, my family hasn't seen me."

Although life on the primary campaign trail will bring its fair share of hardship, O'Rourke seems determined to do what he loves and make his family happy. Since family is such a huge part of his life, there's a good chance people will be hearing more about his kids in the weeks to come.