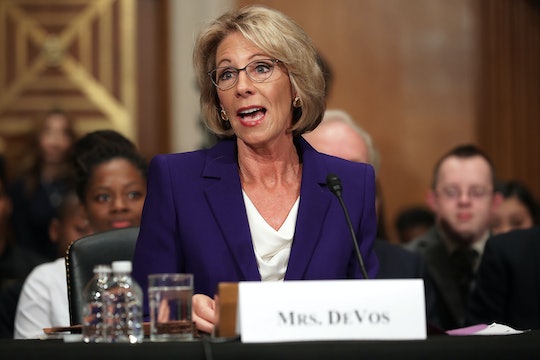 Who Are Betsy DeVos's Kids?

On Monday, Senate Democrats are working their damnedest to reject President Trump's inconceivably ill-qualified pick for Secretary of Education, Michigan billionaire Betsy DeVos. DeVos and her family are both political institutions and barons of capitalism in the the Great Lake State. It's also no secret she's never stepped foot in a classroom as an educator or administration position — and she didn't attend public school as a child, having gone to private schools her entire life, including college. It's also no secret how much DeVos and her family have given to the Michigan Republican Party, as well as GOP candidates across the United States. But what about her family: Does Betsy DeVos have kids?

DeVos' children are now grown adults. According to BetsyDeVos.com, her official website, DeVos is a grandmother, with four children and five grandchildren. The DeVos children include Andrea DeVos Abraham, Elisabeth DeVos, Richard DeVos III, and Ryan DeVos. Of her four children, none of them have attended government-run public schools, according to Quartz. DeVos' daughters, Andrea and Elisabeth, were mostly home-schooled. Her sons, as Quartz also notes, attended Grand Rapids Christian High School in Michigan, where tuition is $10,000 annually. DeVos and her family are one of the wealthiest families in the state of Michigan.

Her daughter Andrea is a co-founder of the Woosh Beauty — makers of what Cosmopolitan magazine described as a Caboodle Kit for adults last year.

DeVos' other daughter Elisabeth — who goes by Elissa — graduated from Princeton University, where she met her future husband, Nate Lowery, a Michigan entrepreneur (not pictured).

Richard DeVos III — Rick — is an entrepreneur who graduated from Calvin College; he is also the founder of ArtPrize, a "social experiment" where the world's largest art prize would be determined by public vote as well as venture capital seed fund, Start Garden.

Ryan DeVos is a "strategic specialist" for the Orlando Magic NBA team, according to his LinkedIn profile.

It would seem strange that a person with no personal experience in the public school setting would even be nominated by the president as the secretary of education. Interestingly enough, DeVos' own personal interest in education came after a visit to a private Christian school, the Potter’s House Christian School in Grand Rapids, Michigan. Speaking to Philanthropy magazine in 2013, DeVos said:

At the time, we had children who were school-age themselves. Well, that touched home. Dick and I became increasingly committed to helping other parents—parents from low-income families in particular. If we could choose the right school for our kids, it only seemed fair that they could do the same for theirs.

More Like This
Prince William Was Quick To Remind Someone That He Does School Drop-Off Duty Too
Kristen Bell Reveals Her Daughters' Handy School Night Routine Called "Flat Man"
16 After-School Snacks For Hangry Kids
I’m Getting Dual Citizenship For My Jewish Children, Just In Case.