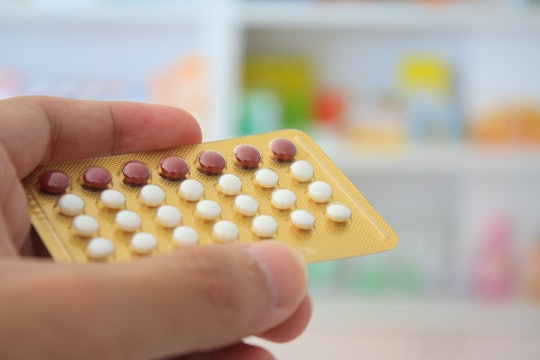 Here's How Birth Control Can Change Your Mood, According To Science

Personally, I think birth control rocks. It has clear benefits — namely, preventing pregnancy — but, it also can have side effects, both positive and negative. Finding the right birth control method can seem overwhelming, as any Google search is likely to yield conflicting results, and if you ask on social media about others' experiences, well, yikes. You may have heard conflicting things about how birth control can help or hurt your mental health, too, so it's normal to wonder, "Does birth control impacted your mood?" According to scientific experts, it totally can, but like most things in life, to the degree in which you are personally impacted may vary depending on a variety of factors.

According to the American Academy of Family Physicians, a change in one's overall mood can definitely be a side effect of hormonal birth control for some users. The good news is, if you do experience a mood adjustment due to the use of hormonal birth control, that adjustment probably won't last for a significant period of time. The American Academy of Family Physicians goes on to report that most side effects of birth control go away within a couple of months and as a person's body adjusts to the change in hormone levels. If your mood changes don't change in the aforementioned time period, you should definitely talk to your doctor and consider changing birth control methods (perhaps one that's low in hormones).

A 2016 study published in JAMA Psychiatry found a connection between birth control use and depression, finding that women who used hormonal birth control were more likely to be diagnosed with depression and to use antidepressants. It's important to note that correlation doesn't necessarily mean causation, and the risk of depression for contraceptive users was still pretty low. However, since millions of people use birth control, even a small percentage can mean a lot of people are at risk. The Association of Reproductive Medicine recommends that people with a history of depression consult their doctor if their depression worsens while on the pill.

To make things even more confusing, additional research shows that hormonal birth control can help your mood. A study of sexually active American women published in the American Journal of Epidemiology found that young women who used hormonal contraception had lower levels of depression and fewer suicide attempts than women who didn't.

A review of five studies published in the Cochrane Database of Systematic Reviews found that hormonal birth control pills containing drospirenone (like Yaz and Yasmin) can reduce premenstrual syndrome (PMS) symptoms in people with severe symptoms or premenstrual dysphoric disorder (PMDD). While more research still needs to be done about using birth control to treat PMS, that sounds pretty darn good to me.

The bottom line: you might have to try a few different kinds or birth control before you find a birth control method that's right for you. Be sure to ask your health care provider about potential side effects, be honest with them about your medical history (including any history of depression), and don't be afraid to ask for something different if one birth control method isn't working for you.