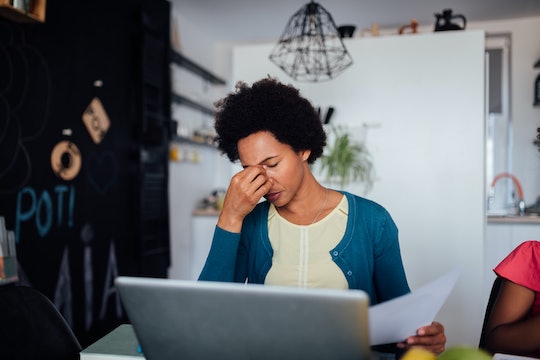 So Can Birth Control Really Make You Tired? Here's What The Experts Say

When women are considering birth control options, there are a number of things they have to consider. From how it works, effectiveness, how long it lasts, what doctors recommend, and more, there are also a number of factors that determine if a given form of birth control is the right one for you. Possible reported side effects are also important things to consider. Does birth control make you tired? Will it help you clear up acne or make it worse? Does it affect your libido? Although some potential birth control side effects, like developing blood clots, are quite serious, others are more of an annoyance than anything else. Still, if the birth control method that you use zaps your energy and leaves you feeling lethargic and run-down, it could affect you productivity at work, upset your mood, and other aspects of your life. So what's the deal? Can birth control make you tired?

Dr. Norman Back, the chairman of the OB-GYN department at CentraState Medical Center, tells Romper that he's prescribed hormonal birth control pills to countless women, and has never heard of birth control directly causing you to feel tired. However, he stressed, the fact that he hasn't personally dealt with this side effect in his patients doesn't necessarily mean it isn't something other women have experienced.

OB-GYN Dr. Angela Jones has a similar perspective, telling Romper by email that she's unaware of there being any clear, established link between hormonal birth control pills and exhaustion. "I have not encountered sleepiness as a side effect of contraception, though, theoretically speaking, I suppose it could happen, specifically when you look at, say, a combination oral contraceptive pill's mechanism of action, which includes decreasing androgen levels (testosterone being one of them)," Jones says. "This is accomplished by the increase in shb-globulin (sex hormone binding globulin) seen in women taking oral contraceptive pills. If we attribute things such as energy levels, motivation, sex-drive, etc. to testosterone levels, I suppose decreased energy [or] sleepiness (if you will) could possibly be associated with birth control use. It’s just that in my own clinical practice, I don’t see many women complaining of this."

If there is a true link, it's likely that most people see it as an indirect effect of something like lowered libido or motivation. Fatigue may also be correlated with depression. Many birth controls warn that depression is a potential side effect, though the link between the two is not totally clear, and still needs more research. As Refinery29 reported, “a 2016 review of different studies focusing on hormonal birth control and mood concluded that much of the available research is guilty of "inconsistent research methods and lack of uniform assessments."

That being said, given how over-scheduled and overworked many women are, it's likely that even if they are experiencing sleepiness or exhaustion as a side effect of birth control use, they're probably attributing it to something else entirely. If there are innumerable reasons as to why you might be tired, you're probably not assuming it's your birth control right off the bat.

Although it's not necessarily known to make you sleepier, research conducted in Brazil in 2007 found that women taking oral contraceptives experience more efficient nighttime sleep than women who aren't. That means that some women may actually sleep more soundly and feel more energized during the day. In order to get a better idea of birth control's effect on energy levels and sleep, more research is needed.

Ultimately, it's possible that your preferred method of birth control is leaving you feeling exhausted or otherwise affecting your quality of sleep. This may happen because of decreased testosterone and increased levels of other hormones.

“Some hormonal birth control options have stated that fatigue is a possible side effect,” Dr. Heather Irobunda, an OB-GYN based in New York, told Healthline. Fatigue is listed as a side effect (often written within the patient insert package inside the box) on certain pills, vaginal rings, and implants. Most side effects, including excessive tiredness, can be attributed to hormones in the contraceptive, so the higher the hormone level, the more likely you are to feel side effects. If you are concerned about fatigue or other side effects of birth control like breast tenderness, acne, or weight changes, you may prefer the copper IUD like Paraguard, which is a non-hormonal contraceptive, per Planned Parenthood (though it may cause other side effects like excessive bleeding).

Because there are so many things that can cause energy depletion, if you're experiencing unshakable tiredness it might be worth having a conversation with your doctor, who can rule out other causes. If you suspect that your birth control method is wearing you down, bring that up with your doctor, as well. Sure, they might first dismiss your worries or want to make sure that there's nothing else going on, but if it is the birth control, there's something that can be done about it. There are so many options when it comes to contraceptives nowadays, there's no reason to stay loyal to one that's making you feel terrible.

Hachul, H. 2012 "A Population-Based Survey on the Influence of the Menstrual Cycle and the Use of Hormonal Contraceptives on Sleep Patterns in São Paulo, Brazil" International Journal of Gynaecology and Obstetrics, https://pubmed.ncbi.nlm.nih.gov/23195296/

Dr. Norman Back, the chairman of the OB-GYN department at CentraState Medical Center

This article was originally published on Aug. 1, 2017