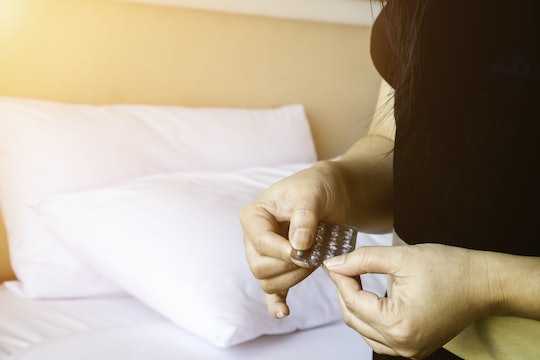 Here's How Birth Control Changes Your Boobs, According To Science

I don't know about you, but I definitely asked myself, "Maybe it'll make my boobs bigger?" when I contemplated taking birth control. The idea that your chest size will increase if you're taking contraception has been a long-standing myth, to be sure, but does birth control make your boobs bigger? Like, actually make them bigger? The answer is yes, sort of. According to the following researches, you will probably notice a slight difference, but your boobs will probably return to their previous state after a few cycles of birth control and as your body becomes accustomed to the oral contraceptive itself.

For those who aren't aware and/or haven't been introduced to the pill just yet, According to Kid's Health birth control is a daily pill that contains a combination of the synthetic hormones estrogen and progestin, which means that taking birth control on a regular basis increases the natural hormone levels in your body. According to Healthline, breast enlargement is likely caused by fluid retention or temporary weight gain. Over time, your body should get used to the increased hormones and the side effects, like enlarged breasts and weight gain, should subside. In short, yes: an increase in cup side could be a side effect of birth control, but it will be temporary so, well, don't go too crazy buying extra bras just yet.

So what other side effects can birth control cause? Well, according to WebMD, oral contraceptives can cause nausea, headaches, breast tenderness, and changes in menstruation, although most of these should regulate themselves after two or three cycles of birth control. If they do not, you might want to speak to your health care provider about trying a different kind of hormonal birth control that might not cause continued side effects. In rare circumstances, Medical News Today says birth control can also cause some more severe side effects like blood clots, heart attack and stroke. But, again, those are extremely rare.

And of course, birth control comes with some added benefits, other than preventing an unplanned pregnancy, that hopefully outweigh the slight risks. For instance, and according to Planned Parenthood, birth control can help relieve menstrual cramps, keep endometriosis from growing, prevent ectopic pregnancy, and prevent ovarian cancer and cysts.

If you're worried about being able to remember to take your birth control pill every day (a pretty valid concern, if you ask me) there are other hormonal birth control options out there. For instance, the Nuva ring is inserted into your vagina once time each month, then removed before your period starts.

Or, for an even lower maintenance option, an intrauterine device (or IUD) can be inserted into your uterus by a doctor. Some IUDs contain hormones that are released over time, while others simply make it difficult for the sperm to reach the egg. According to Planned Parenthood, IUDs usually last for up to 10 years, so even though the one-time cost of an IUD is typically about $1,000, it can last you quite a long time and, for some, be worth the investment.

Each of these methods of birth control shouldn't affect your fertility, either and according to Parenting. The site goes on to say that once you stop taking the birth control pill, or have your IUD removed, you should be able to get pregnant on your next cycle of ovulation.