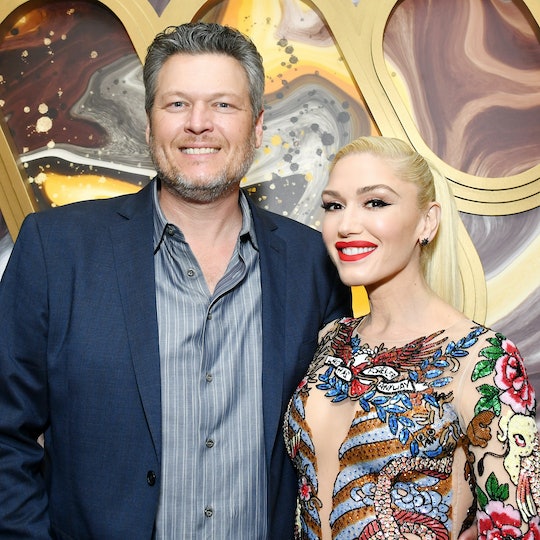 One of country music’s biggest stars is officially off the market. That's right, Blake Shelton and Gwen Stefani are engaged. While the musical pair are only recently engaged, they’ve been dating for roughly five years and have long had lives that are fully entwined. Case in point? Blake Shelton doesn't have kids of his own, but he's credited as being great with his soon-to-be wife's three sons

"He is a good dad, actually," Stefani told TODAY in September 2019 when asked if she thought Shelton would have made a good dad. "He's been helping me out a lot, so I literally get to the point where I'm like, 'You gotta get home, I need help.' It's hard. I got three boys."

While Shelton appears to have settled into his role as a kind of bonus parent to Stefani's three boys, it seems the country musician didn't always feel at ease. "For a long time, it was awkward trying to figure out what my place is and in their mind too," Shelton told People in 2017. "The best part for me, selfishly, is discovering a part of myself that I guess I never really knew was in there. It's definitely an instinct that kind of kicks in."

In fact, like a lot of parents, Shelton joked to People that there's some days when he can't help but count down until they're back in school. "There's days where you go, 'Oh my god, when does school start?'" he told the magazine. "An hour later you’re going, 'God, I can’t wait ’til they get home.'" The country music singer went on to confess that he found Stefani's kids to be "so damn funny."

"It's easy to fall in love with those kids," he told the magazine. "They're pretty special."

Roughly a year later, the country music singer later told TODAY that while he'd fallen in love with Stefani's three boys, being a part of kids' lives wasn't something he necessarily anticipated happening in his life. "I never saw that coming, but it's so fun," Shelton told TODAY. "At this point in my life, I kind of had put [having kids] as like, ‘Well, I guess that wasn’t meant to be.' Then all of a sudden it happens one way or another and it’s like, ‘Wow, [I] missed out on a lot.' And so having them around – I don’t even know how to describe it. It’s so much fun."

On Oct. 27, while announcing their engagement, Shelton thanked Stefani for “saving my 2020… and the rest of my life” by agreeing to marry him. And while he was clearly already filling the role of stepdad, Shelton’s engagement to Stefani only solidifies the title.

This article was originally published on Jan. 26, 2020