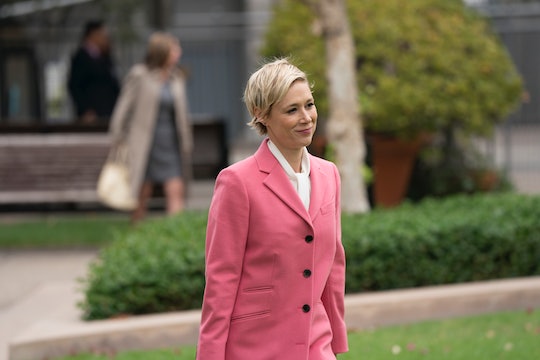 Bonnie May Have Killed This Character On 'HTGAWM'

Every week How to Get Away with Murder inches closer to revealing who was killed at Connor and Oliver's wedding, but always stops short before giving away the answer. There are a few key facts that remain consistent, but they don't add up to a satisfying conclusion. However, this fan theory attempts to figure out what happens that night, and it all hinges on Bonnie and her boyfriend Ronald Miller, the interim District Attorney. So does Bonnie kill the DA, even though she's falling in love with him?

She might, if this theory is to be believed. The night of the wedding, Bonnie is shown outside with Laurel's infant son Christopher, the baby left crying in the snow while Bonnie placidly smothers an unseen, injured person. Then she takes the baby back into the party, where Michaela notices blood streaking down Bonnie's leg. Bonnie won't answer her about whose blood it is, but out on the dance floor two characters appear to be MIA. Oliver misses out on his first dance with new husband Connor, while Nate won't answer his phone — because it's in Bonnie's hands for some reason.

Reddit user WalmartWes takes all those disparate facts and tries to craft them into a compelling whole. And this theory could be just realistic enough to be true.

The theory speculates that the person killed on the night of the wedding is Ronald Miller, Bonnie's boyfriend. He may have been on his way to the reception to deliver some bad news to the Keating crew when he crossed paths with Asher and it resulted in a fight. Redditor WalmartWes wrote that Asher may have injured Miller, then called Bonnie to deal with the fallout:

Asher calls Bonnie, which is important because the person who let Bonnie know that there's a dead man walking outside was comfortable calling Bonnie first and we know Asher's first instinct in that type of situation would be to call Bon Bon.

Per the theory, Bonnie then heads outside to smother Miller before calling Frank and Nate to take care of the rest. Nate helps hide the evidence because he feels so much guilt over upending Bonnie's life by searching for the child she gave birth to as a teenager. Frank's just your go-to murder cleanup guy.

The theory even explains why Bonnie has Nate's phone. It could be to uphold his alibi: if anyone traced his phone, it would look like he was at the wedding all night, not off disposing of the DA's body. It's a plausible theory, but unfortunately it's missing a motive. Bonnie seems to feel genuinely for Miller, so it's unlikely that she would kill him without much internal conflict, unless something really bad is revealed about him before then.

Asher's involvement is also uncertain since he seems to be romancing Connor's mother at the wedding. If he just nearly killed someone, he might not be in the mood to hook up with his friend's parent in the parking lot. Nor does it account for Oliver's whereabouts. But even if the whole situation doesn't unfold like this on the show, parts of it could prove to be accurate. Nate, Miller, and Bonnie might all be involved in something that takes a dire turn — even if the specifics are still uncertain.