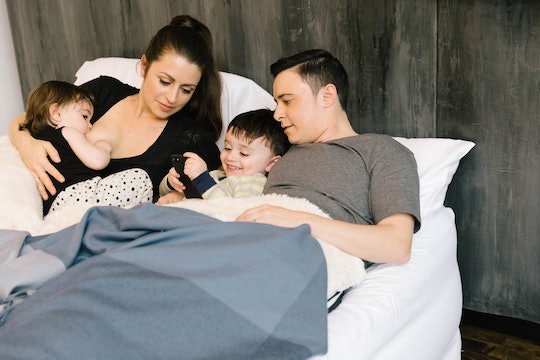 My mom had four children and is quick to admit that by the time she was pregnant with my brother, her last, he basically sat on her vagina for the duration of the nine months she carried him. She carried low, a popular occurrence with many women who have seen their bodies stretched in all directions as a result of multiple pregnancies. Like my mom, those women will tell you their preparedness for what's to come made pregnancies following their first a different experience. But they did wonder: Does breastfeeding hurt as much with your second kid?

"Breastfeeding should not hurt in general," Leigh Anne O’Connor, an International Board Certified Lactation Consultant (IBCLC) and parenting coach, tells Romper in an email interview. "If it hurts, there is something off with the latch — it could be the position and angle of the baby, it could be from a misalignment in the baby, or an issue with the oral anatomy, for example, tongue tie."

If you do have an issue with latching and suspect tongue tie, then you'll want to seek the advice of your child's pediatrician, as well as that of a lactation consultant. According to Baby Center, about 4 percent of babies are born with a tongue tie and it tends to run in families. However, many cases of tongue tie do correct themselves during a baby's first six weeks as a result of structural mouth changes, the website noted.

"Tongue tie is a common problem in infancy," Dr. Emily Edwards, a pediatrician at MemorialCare Saddleback Medical Center, Laguna Hills, California, tells Romper. "Most of the time, it will not spontaneously resolve."

In addition to poor latch, symptoms and signs of a tongue tie include a clicking sound when nursing, gassiness, reflux or colic, and poor weight gain, according to Mommypotamus. You may also notice a low milk supply, plugged ducts and/or mastitis, and general discomfort while nursing, the website noted.

But the reason behind a poor latch isn't always a tongue tie. If your baby was premature, you have inverted or flat nipples, or you have poor positioning during feeding time, you may also have issues with latching. According to La Leche League International (LLLI), a semi-reclined position might help your baby find a deeper latch. You might also try the laid back technique or football hold, a position that is especially helpful to moms who have had C-sections. "Any of these issues can happen with any baby whether the first, second, or tenth," O'Connor says.

Vasospasm can cause nipple pain as well, IBCLC Michelle Kunschke told Romper. Vasospasm is when blood is pushed out of the nipple due to situations with poor latch or positioning, poor suckling mechanics in the baby (again, like tongue tie), or if the mother has Reynaud's Syndrome, according to Kunschke. A sign of vasospasm caused by Reynaud's Syndrome is a nipple that turns white, then shows a noticeable triphasic color change — from white to blue to red — as blood flow returns, explained Kelly Mom.

Keep in mind that, while you aren't supposed to experience pain while breastfeeding, the truth is many first-time moms do. Because let's be honest: It probably took you some time to get the hang of it all and chances are likely that until you did, you experienced some level of pain related to cracked nipples, scabs, and, yes, even bleeding. That means the second time around you'll have a better chance at skipping the learning curve, plus science shows your body will also be able to more readily make milk.

Also important to keep in mind? If breastfeeding is your goal, then you might want to make it your goal to get to the root cause of your issues. But for some women, breastfeeding proves to be impossible or it's just not their thing — that's OK, too.

After all, whether it's your second child or fifth, what you know by now is that taking the pressure out of pairing — and off of fellow moms — makes this whole parenting thing a hell of a lot easier. And that's something we all can get behind.