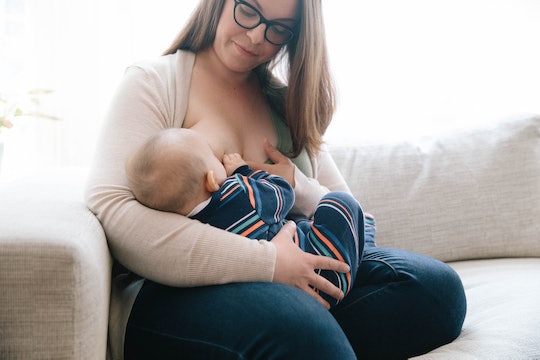 The Truth About Using Breastfeeding As Birth Control

Rumors that breastfeeding can act as a temporary birth control seem almost too good to be true. Granted, most postpartum women don't start ovulating for at least a few months after giving birth, whether they breastfeed or not. But does nursing work as a long-term birth control? Does breastfeeding prevent pregnancy? To put it as confusingly as possible: yes and no. The answer is definitely not black and white, and having incorrect information can be the difference between getting pregnant again or not.

Breastfeeding, despite it's many benefits, isn't a "one size fits all" method of birth control, and, most importantly, it only prevents pregnancy for a very specific window of time. There are many factors for both a mother and her baby that influence how effective and long lasting it will be for preventing pregnancy.

According to Baby Center, a baby eating only breast milk, also known a exclusive breastfeeding, can delay ovulation for a time. That being said, each woman's body responds differently to breastfeeding and some women's cycles return sooner than others.

Planned Parenthood explained that breastfeeding acting as birth control is called the lactational amenorrhea method (LAM), and it's effective only during your baby's first six months and only if you're nursing every four hours during the day and every six hours at night. After that, your baby will start to nurse less often, and LAM can no longer be relied upon to delay ovulation.

In an interview with Romper, CLC Danielle Spradlin says that there's compelling evidence that LAM, when practiced correctly, is up to 98 percent effective — that's greater than condoms. She also notes, however, the importance of following the "rules" of LAM to a T:

When my clients ask about breastfeeding as birth control I stress the importance of following the rules: exclusive breastfeeding, no pacifiers, no sleeping long stretches, no return of menses. This is a very small number of mother-baby pairs who will meet the criteria.

Spradlin admits that there are very few women who will meet this criteria perfectly, since many moms choose to combo feed, use pacifiers, or stop nighttime feedings. For those who stick with the "rules," however, it can be very effective until the return of your cycle.

Although getting pregnant while you're breastfeeding an infant isn't the end of the world, and many parents intentionally have their children close together, according to the World Health Organization it's best that women wait at least 24 months after giving birth to conceive again, and since LAM is only effective for about six of those months, most moms turn to other methods of birth control until they're ready for baby number two.