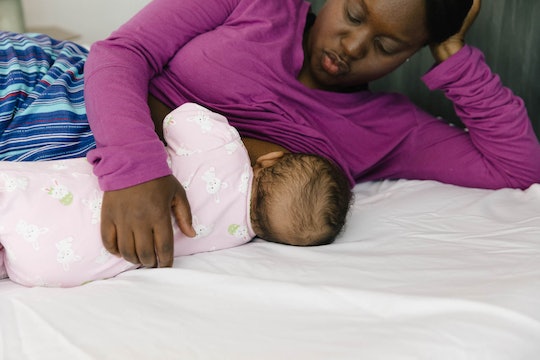 Apparently Breastfeeding Can *Reduce* Your Baby's Pain Like Magic

No one likes to see their baby in pain. It's so upsetting to see your child wail and cry, whether it's from a vaccine or they've somehow managed to get their mittens off and scratch themselves. It's the pits. Some recent research suggests that there might be a pain reliever for your baby that hangs out right around your heart — your boobs. Yep. It's said that breast milk can have an analgesic effect on your little one. How do they measure that if it's true? Does breastfeeding really reduce baby's pain?

Several studies within the past 10 years have examined the link between the noticeable, measurable pain suffered by neonates and breastfeeding. These studies have determined over and over again that breastfeeding, specifically breast milk, has a marked pain-reducing effect on neonates experiencing pain. This is determined by observing physical changes, blood pressure, and heart rate of the child during duress while breastfeeding and when not breastfeeding, noted Seminars in Perinatology.

I've always known my boobs were pretty awesome. I mean, not only did they go full She Hulk after having my baby (you wouldn't like her when she's angry), they also seemed to keep my colicky son quiet for long stretches. Had I known it could soothe his pain during vaccines, I'd have whipped one out faster than you can say T-DAP.

Strangely enough, it's not just the breastfeeding that seems to have an effect on your baby's sense of pain and their reaction to it. According to Seminars in Perinatology, skin-to-skin contact, kangaroo style holding, music therapy, and attachment to the parent can also provide a measure of relief for the baby experiencing the pain.

However, according to the Cochrane Database, breastfeeding is superior to all other forms of non-pharmacologic interventions which have been tested when looking at the amount of pain relief. It's better than a mother's touch, glycerine drops, and kangaroo holding. Simply put, there's something in the breast milk itself that is triggering a calming reaction in the neonate who is experiencing discomfort.

Luckily for the babies and the worried mothers, these therapies can be combined to great effect when looking at the level of pain your child is experiencing. Think about it. If you get your period and experience cramps alongside your unwelcome monthly visitor, you may not just sit back and take it easy to decrease your level of pain. If you're anything like me, you chew a few Midol, drink several gallons of coffee (or at least a few cups), turn on the old heating pad, and maybe have a glass of wine in the evening. One or two of these things help, surely, but all of them combined are far more helpful in improving pain overall. It's the same idea with babies. Sure, a boob is great, breast milk is just aces, but nursing and skin-to-skin, and maybe a little cooing and singing, combine to achieve a much better result overall.

Does breastfeeding reduce baby's pain after the initial impetus for said pain, be it vaccine, circumcision, or something else entirely? Well, at least in the case of circumcision, it seems to continue to not only work, but also prevent pain by preventing subsequent urinary tract infections post-operatively, according to ACTA Paediatrica. The benefit is two-fold. One, it provides a calming, analgesic effect for the child, and the second benefit is that the immune support provided by the milk helps stave off any bacterial infection that may want to set in after the procedure.

Breastfeeding is amazing if you can and want to swing it, and apparently, it may do more than we even thought.

More Like This
There’s A Reason Your Baby Always Falls Asleep While Breastfeeding
If Breastfeeding Makes You Tired, Here’s How To Keep Your Energy Up
Parent's Guide To A Baby's Dry Cough: Why They Happen & How To Treat
Can You Breastfeed After A Breast Lift? Experts Explain