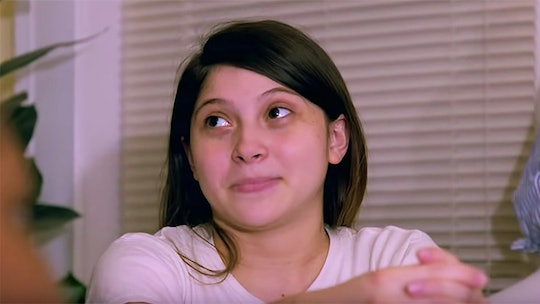 Life is already tough enough for most teens but when you factor in a baby, things get considerably more complicated.Teen Mom: Young and Pregnant star, Brianna Jaramillo, proves it. The August 2017 birth of her son, Braeson, may have diverted Brianna's plans — like where the 18-year old mom will live. With last season's talk of moving from Wisconsin, does Brianna from Teen Mom Young and Pregnant still live in Oregon?

It seems like there's a always slew of things going on with each teen mom, but it looks like for now, Brianna is in Oregon still. The season premiere showed as much with Brianna visiting grandparents, seeing the breathtaking sights of Mount Rushmore, Yellowstone, and Portland, while struggling with the reality of being so far away from her sister, Vanessa. Then there's the stress of not having a job or place to live but details schmetails, right? Back in Season 1 of Teen Mom: Young and Pregnant, Brianna's mom mentioned her plan for relocation from Wisconsin to Oregon. Brianna's new boyfriend Robert Reams, (after the breakup with boyfriend of three years, Danae), proved slightly problematic when Bri asked him to move with her and, well, you'll have to watch to see how that one plays out. The first episode this season showed all the challenges Brianna's faced with, so luckily, Vanessa flew to the rescue for a visit, and even helped babysit nephew Braeson. Bravo for the unbreakable sisterly bond.

The sisters are extremely close, and though it's never easy to leave loved ones behind in search of new horizons, fans hope the changes are in Bri and Braeson's best interest. Still, goodbyes are legit the worst. This season on the show, viewers get to see more of Brianna's emotional struggle with Braeson's disability (he was born without a left forearm and hand). She blames herself, as a lot of moms might relate to, but Braeson's outcome wasn't because of anything Brianna did (or didn't do). It was actually from constricted growth in utero (amniotic band syndrome). The two met with an Easterseals therapist — a nonprofit aimed at providing resources for physically challenged babies while also, as the website claims, "redefining disability for the 21st century." But as Braeson had issues hitting milestones (like crawling), Brianna became understandably nervous about his future and how the differences might affect him later in life.

"I feel like it’s hard to watch him struggle," she told her therapist on the episode. "I know that he’s getting frustrated. He wants to do it, and that’s what makes me feel the worst." Brianna previously told People her feelings on the topic saying, "It was definitely hard hearing about it and realizing he might grow up and realize that he’s different from everybody else," she said. "That was definitely hard. But, talking to my doctor about it — it made it a lot easier to handle it, and I realized it wouldn’t slow him down." She went on to add, "He’s going to adjust to living with it because he was born with it. It’s not like he had an arm and lost it. He’s going to learn to do everything that we do but without it."

There you go, Mama. Now that the little guy has officially hit the one-year mark, maybe the move to Oregon will be a good thing for the mother-son duo. Change might be the spark they need and that move was a huge change.

No one really knows how things will play out this season on Teen Mom: Young and Pregnant, but it's clear that Brianna and Braeson have a ton of support: online, from her sister across the country, and in that darling boy's eyes. Don't worry girl — you've got this.