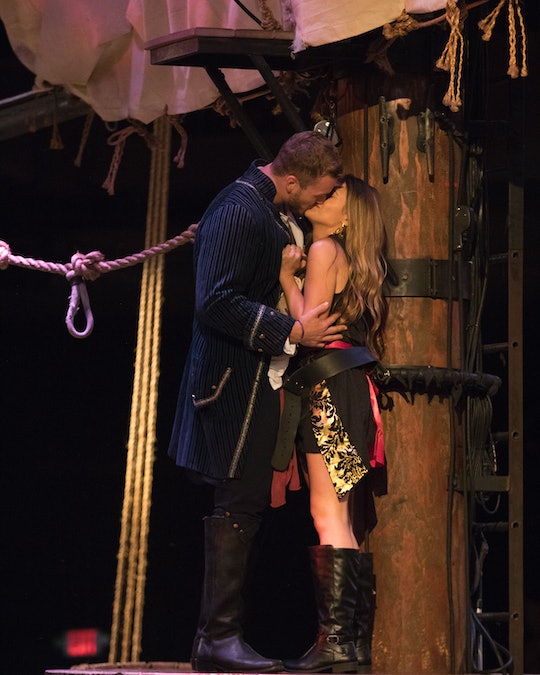 So far this season of The Bachelor proved all is fair in love and war. Or maybe it's more like all's war in reality TV love. It's especially true between contestants Hannah B. and Caelynn as the tension between the two beauty queens came to a rapid boil with a confused — but chiseled — Colton in the middle. It's still too early to know for sure, but seeing as she is basically the winner of the state of North Carolina (in the pageant world anyway), does Caelynn win The Bachelor?

I know you're looking for me to spill all but this is a spoiler-free zone, my friends. There are still quite a few episodes left before the final four are revealed — let alone the winner of the next Neil Lane diamond ring. While I don't have the exact answer you're looking for, let me give you the reasons I think Caelynn will make it to the final four (at the very least). Cool? Cool.

First things first: Caelynn's entrance was pretty spectacular. Sure, there wasn't anything majorly epic involved, but after highlighting her sash and pageant queen coolness, she made it clear she'd happily change "Miss North Carolina" to "Miss Underwood." Strong start, but is it enough?

Once things got rolling, Caelynn was the first girl Colton kissed, which is a huge step towards Engagement Town. Someone has to break the ice, and TBH, I'd rather be the first than the last. Either Colton really felt the sparks between them or he just wanted to get kissing already. Regardless, Caelynn holds more than the Miss North Carolina title — she also holds the "Winner of First Colton Kiss"crown and no one can that away from her. I'm talking to you, Hannah B.

Then after breezing through the first rose ceremony, Caelynn swashbuckled her way to Colton's heart in the pirate-themed group date. She was met with Hannah B.'s thumbs down, but Caelynn hopped onto the plank and jousted like a pro. She then climbed up and untied her man, rescuing Colton with ease. Colton obliged with a kiss in front of all the other women. With all the drama that's recently surfaced between Caelynn and Hannah B., it's easy to forget the two once seemed rather close with nothing but lovely words between the two. Speculations suggest the friendship went awry when Caelynn became the first runner-up in the Miss USA pageant. Little time had passed after that before the two were thrown together into the Bachelor mansion where the "feud" is playing out on national TV.

So how does this all boil down to where Caelynn lands in the competition? Multiple sources claimed the final four's hometowns were filmed in the fall of 2018 with an elimination before another overseas trip. That's not a spoiler, so don't get your hopes up. Most seasons have followed the same pattern towards the end. Stakes are high with the hometowns and that's generally when the Bachelor or Bachelorette do the whole fantasy suite bit and kinda-sorta know who they'd like to spend their life with.

Maybe you're no closer in knowing if Caelynn wins Season 23 of The Bachelor, but there are plenty of reasons she should make it pretty far — if not all the way. Honestly, with the connection she and Colton already have, there isn't much standing in her way. Oh, except Hannah B. (again). Meh. Something tells me that will all work itself out — hopefully on camera.