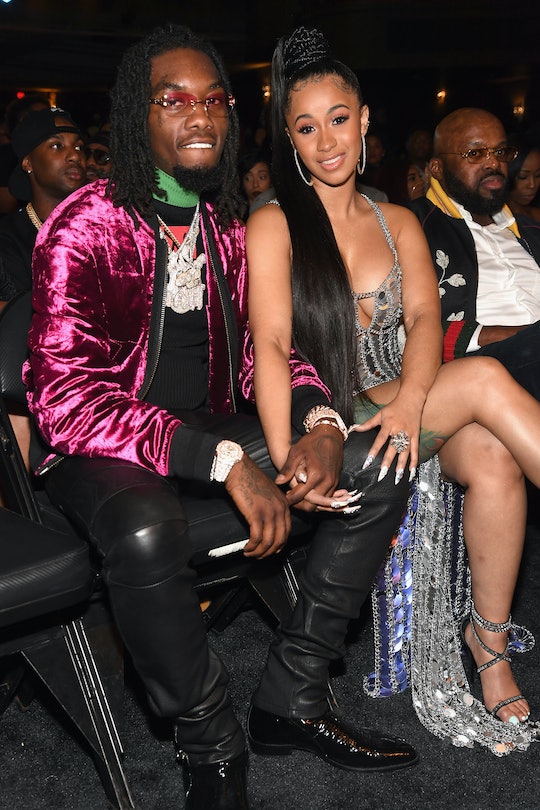 One of the best things about being a fan of Cardi B is that she is so honest with her fans about pretty much everything. And since giving birth to her daughter, Kulture, last month, that hasn't changed; Cardi B has been super real with her fans about motherhood and all that comes with it. Given how Cardi B loves her daughter and seems to be adoring motherhood, fans might be wondering if Cardi B wants more kids. But, they shouldn't hold their breath — Cardi B's recent tweets set the record straight, at least for now.

Cardi B and her husband, Offset, welcomed their first child together on July 10, according to CNN. And since then, the new mom has been busy. In the three weeks since she gave birth, Cardi B has revealed that she is spending every single moment with her daughter. But, she has also said that motherhood wasn't what she expected — and had to pull out of her tour with Bruno Mars because she needed time to focus on her health and caring for her baby. But even though she's clearly loving #MomLife, that doesn't necessarily mean that she is ready to have more kids anytime soon. After one fan asked Cardi B on Twitter on Tuesday if she wanted "a brother or sister for Kulture," Cardi B had the best response.

"She got three already," Cardi B tweeted. "Later on in life I'll have more babies."

Confused? Don't be. Although Kulture is Cardi B's first child, Offset does have three other children from previous relationships, according to People. Offset is the father to two sons, Jordan and Kody, according to People, and a daughter, Kaela Marie. This means that Kulture will have enough siblings to play with, hang out with, and lean on for advice in the future. So, fans shouldn't worry about Kulture being bored or anything like that.

But that isn't to say that Cardi B won't have more kids somewhere down the line. As you'll recall, she shared on Twitter: "Later on in life I'll have more babies."

But right now, Cardi B really doesn't want to be pregnant, again. After one fan tweeted on Tuesday night that they thought that Cardi B was ready to have a second child with Offset, she wasn't too happy about it. "If I get pregnant again I'mma curse ya out," Cardi B wrote. Rest assured, she's not looking to give Kulture a sibling any time soon.

But when it comes to other aspects of her relationship, Cardi B seems more than ready to jump back in to things with her man. Although her body is currently recovering from giving birth, Cardi B also revealed in a tweet that she is counting down the days until it is OK for her to have sex with Offset again.

This transparency that Cardi B has with her fans is so refreshing. By opening up about whether she wants more kids, Cardi B has answered one lingering question that fans have been dying to know.

This isn't the first time that Cardi B has been real with fans about pregnancy, motherhood, and how she's still figuring things out. During an Instagram Live session last week, Cardi B revealed how challenging being a mom is. Cardi B said, according to People:

No wonder Cardi B doesn't want more kids right away. Newborns are demanding, and pregnancy does a number on your body. But, who knows, maybe once Cardi B gets into the swing of things, she might chat more about her plans for more kids in the future.