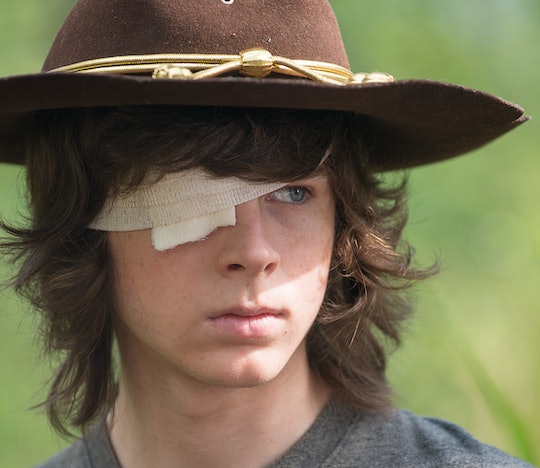 Does Carl Die In 'The Walking Dead' Comics? Season 7 Will Do A Number On Him

The seventh season of The Walking Dead is off to dramatic (and traumatic) start. If viewers thought that they could relax for a second after Negan's bludgeoning victims were finally revealed, well, unfortunately they were wrong. Things have only continued to be tense in the episodes since Negan's shocking act, leaving all TWD fans nervous for the fates of their favorites. Though we knew Carl would be safe from Negan given Negan's line in the finale, the boy isn't exactly home free. So, does Carl die in The Walking Dead comics, indicating he might meet the same fate soon enough on the TV series?

Carl's been through a lot – arguably more than any other teenage boy in fiction. Beyond the obvious – being launched into a zombie apocalypse – he's suffered particularly astronomical losses. His mother died giving birth to his baby sister, he literally had to shoot his own mother himself, and before that, he had to shoot zombified Shane, a guy who was once like an uncle to Carl, after Rick killed him and he came back in Walker form. Carl also lost Sophia, early on as well as Beth... not to mention his eye. So. Much. Loss.

But is Carl set to lose his own life during the current seventh season of the series? With a maniac like Negan on the loose, it wouldn't be too hard to imagine Rick screwing up the very tenuous alliance between the two men, leading Negan to take his revenge by killing Carl. I mean, viewers did see the Lucille-wielding psychopath attempt to force Rick to chop off Carl's hand in the premiere – so Negan's purported "no violence to women and children" shtick clearly only goes so far.

If you don't want to see spoilers from the comics (which may or may not translate into show spoilers), don't keep reading.

The dedicated Carl fans out there can rest easy on one count – Carl is still alive in the comics, as of the latest issues. Just like TV-Carl, Comics-Carl is missing an eye, but besides that injury, he's safe and sound (well, not exactly "sound," but you know what I mean). Unfortunately, just because Negan doesn't kill Carl (in the comics, anyway) doesn't mean that Carl escapes the madman's reign or terror unscathed in all regards.

In the comic series, a bizarre sort of relationship/mentorship ends up developing between Negan and Carl, after Carl stows away in Negan's truck and ambushes the Saviors. Carl kills a few of them before being subdued. But rather than getting angry and vengeful, Negan is impressed by Carl's action and takes Rick's unwitting son under his wing, in a sense. Of course, Negan's lessons don't stick, and Carl ends up turning on him eventually.

Interestingly, the show might be able to subvert the development of that relationship entirely – by substituting Daryl in Comics-Carl's place.

In a post-finale interview with The Hollywood Reporter, showrunner Scott M. Gimple hinted that "there's going to be a bit of remixing" when it comes to the Negan/Carl relationship from the comics, and that "there may be another character involved who takes some of it." Specifically, Gimples said, "That relationship [between Negan and Carl] will be absolutely shown. Whether it's with Carl or not, I cannot say. But I absolutely want to explore Negan having that kind of respect for someone, which is the hallmark of that relationship."

As for the "other character involved," it is most likely to be Daryl. As Forbes' Paul Tassi points out, Daryl doesn't actually exist in the comics. He was created for the show. What fans have seen of Daryl as Negan's hostage so far echoed a lot of what happened to Carl in the comics. It's very possible that the show will sort of "split" the disturbing Negan relationship between Daryl and Carl, or just give the majority of it to Daryl completely.

But regardless of whether or not Carl survives Season 7, one thing is for sure. If the Carl/Negan relationship does stick to the comics, it's sure to be a particularly disturbing on-screen dynamic and to will a number on Carl psychologically – especially given Carl's history with unhinged father figures and how unnervingly charismatic Jeffrey Dean Morgan's Negan still is. And, of course, I very much doubt Rick would love the idea of Negan bonding with his son. Suffice to say, Season 7's drama has only just begun.