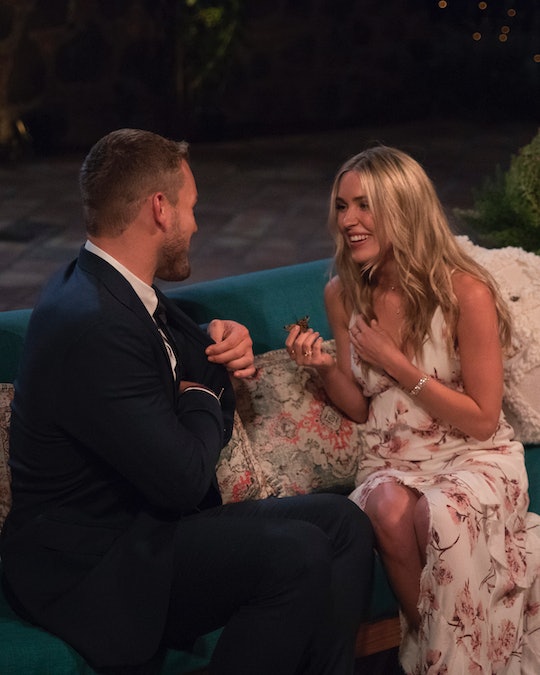 Here's What Fans Think Of Cassie's Future On 'The Bachelor'

It's pretty usual for a cast of Bachelor contestants to openly discuss how smitten their Bachelor appears to be with one particular person, and lately everyone seems equally blown away by Colton's relationship with Cassie. Consensus in the house is that Colton turns into a human heart-eyes emoji every time he sees her, understandably prompting fans to wonder if Cassie wins The Bachelor in the end. The 23-year-old speech pathologist had her first one-on-one date with Colton this week in Thailand, and most of it was spent making out.

Their chemistry is undeniable, and their physical relationship does seem further along than everyone else's. It's pretty standard for beachside one-on-one dates to involve a little deep-sea make out sesh, but Colton and Cassie's stretched into the evening portion of their date. They wound up cuddling and smooching in bed together, which is uncommon to see this early on in the season. Usually, viewers don't get under-the-covers levels of intimacy until fantasy suites. But Colton and Cassie's physical connection doesn't seem surface level. She opened up on their one-on-one about how nervous she was that her family would learn she wasn't a virgin from watching the show. Colton confessed that he was "crazy about" her, which is the first time he's really overtly declared feelings for anyone.

Fans have already seen Colton optimistically claiming that he knows his wife is in this group of women, so viewers can safely assume it does end in a proposal. (In previous years, Bachelors like Nick Viall have experienced moments of doubt around the midway point that threaten to tank the whole endeavor.) That said, Colton definitely reaches his breaking point after an ongoing feud between Onyeka and Nicole disrupts his time with other women at a cocktail party. And based on the most famous preview from this season, Colton will at some point jump a fence to get away from cameras, so it seems pretty clear that the process is taking its toll on him, no matter how strong his relationship with Cassie is.

Meanwhile, previews for the rest of the season also show him getting hot and heavy in an outdoor shower with Hannah G. This may just be misleading editing, but the scene is intercut with Hannah narrating, "I get lost in the moment with him and I can't control myself," and Colton sobbing, calling something "the biggest mistake of [his] life." Of course, all three of these moments are potentially unrelated and were simply spliced together to generate buzz. But it does seem possible that Colton took his physical relationship with Hannah G. further than he intended, which may be causing him some inner conflict.

One thing is certain, though: Twitter is definitely predicting Cassie as the winner of this season. It makes sense, too. Colton is clearly ~so~ into her — to the point where the other contestants can't stop talking about it. While I can't pretend to know how this season ends, all the airtime she's getting with Colton points to her getting the final rose — at least from my perspective.