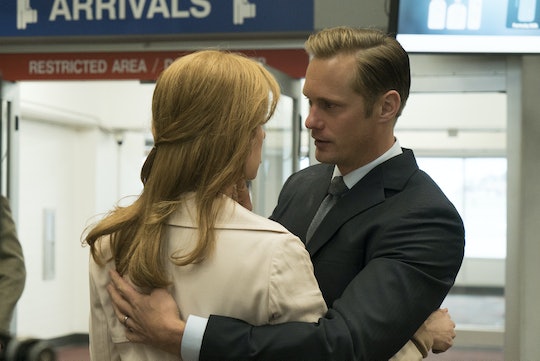 If you need any proof that Big Little Lies isn't a summery "beach read" or "escapist television," it's Celeste and Perry's relationship. In the novel and the series, he is an abusive husband, and it's something that has been going on for a long time. On the latest episode, the cycle of violence and sex continued. While Perry was on a business trip, Celeste went to see their therapist alone and what she revealed wasn't pretty. She may not be able to handle his abuse for much longer. So does Celeste kill Perry on Big Little Lies? She may think it's the only way to stop him.

It doesn't take much for Perry to become enraged and take his anger out on Celeste, and viewers saw this happen yet again on Sunday night's episode. Prior to leaving for another trip, Perry asked why the twins hadn't picked up their toys. When Celeste brushed it off, he immediately got upset with her... and became the most violent we've ever seen him so far after her temporarily suffocated her by holding her face down on the couch. During her session, the therapist asked if Celeste has ever feared for her life with Perry. It was evident that, in that instance, she did.

Celeste's therapist then asked her to create a plan for the next time Perry is violent. In one of the last scenes of the episode, fans saw her get in the car with the twins. It felt as though Celeste was leaving him... until it was revealed that she was picking him up at the airport as a surprise. Given his pattern, though, it's likely that Perry will abuse her again. So what is Celeste's plan? While she would probably not tell her therapist, Celeste may be preparing to kill Perry in order to escape. It's been made clear that Big Little Lies culminates in a murder on Trivia Night... could this be it? (Warning: major spoilers from the novel ahead!)

If you read the novel, you know that's not exactly how it goes down — but Perry does die by someone else's hand. In a surprise twist, Bonnie ends up being the killer. His abuse is revealed to the community, and Bonnie — given her own PTSD from an abusive father — pushes him off a balcony.

As of now, though, it's unclear if the same thing will happen in the series. There have already been several differences: Madeline's affair and Jane visiting Saxon Baker, for example. Perhaps this is all leading up to Celeste taking out her own revenge on Perry. We'll have to keep watching to find out how the series plays out the relationship, and hopefully Celeste is free from Perry soon.